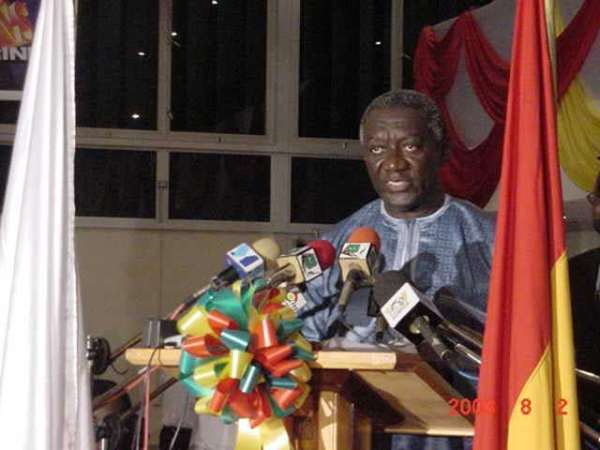 ....To Undermine Modest Economic Gains President J.A. Kufuor has given the assurance that the government will not succumb to pressures and temptations that will undermine the financial discipline and prudent management steps taken so far to build the country’s economy for the sake of next year's elections. “Prudent management thus far has brought a welcome stability to the cedi but this can be easily undermined if we succumb to the temptations of financial profligacy because of election fever,” he said. Addressing the last quarter ministerial retreat at the Ghana Institute of Management and Public Administration (GIMPA), at Greenhill, near Accra on Saturday, President Kufuor said “there will certainly be strong temptations to go for the easy option, but we must resist this”. The retreat afforded the opportunity for the ministers to discuss, among other things, the 2004 budget. “We all know next year is election year and the experience of this country has been that when it gets to election, the government succumbs to pressures and all the discipline of the preceding years are abandoned,” the President said. “We owe it to ourselves and to the nation to ensure that this time round, we do not go down the same road,” he stated. He said the government had done enough work and had laid such firm foundations that would bring good dividends if it remained steadfast. He said the economy, which had posed the most difficult challenge to the NPP administration would continue to test the resolve of the government for a while. "But there is a lot to be proud of in the economic field. We have laid solid foundations for the type of growth that would take us as a nation out of the stagnation that has been the lot of this country for decades," he said. President Kufuor said many of the difficult decisions that the government had taken had been possible only because it had the support and understanding of Ghanaians. He said the people had given the government the support and understanding because they had confidence that the measures taken so far would yield a better standard of living the very near future. “We should never betray this trust,“ he told the ministers. President Kufuor acknowledged the good fortune that the government and Ghanaians had enjoyed and paid glowing tribute to the Almighty God for His kindness. He urged the ministers to trumpet the achievements of the government at roof tops with confidence and be more accessible to the people.