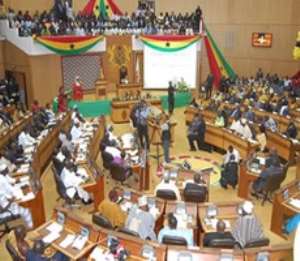 The Appointments Committee of Parliament will today start the vetting of nominees for appointment to the various ministries and regions.

So far, President John Dramani Mahama has made 37 ministerial nominations, with some of them expected to work at the Presidency.

However, of all the nominations, it is only the first batch of 12 ministerial nominees which has been referred to the Appointments Committee by the Speaker, Mr Edward K. Doe Adjaho, for consideration and subsequent approval by Parliament.

The first batch of six nominees who are expected to appear before the committee are Mr Seth Terkper, the Minister-designate of Finance and Economic Planning; Ms Hanna Tetteh Foreign Affairs and Regional Integration; Alhaji Collins Dauda, Water Resources, Works and Housing; Alhaji A. B. Inusah Fuseini, Lands and Natural Resources; Alhaji Sulemana, Roads and Highways, and Mr Clement Kofi Humado, Food and Agriculture.

Article 78 (1) of the Constitution provides that nominees by the President for ministerial appointment have to be approved by Parliament before they can act or hold themselves out as ministers or deputy ministers of state.

Even though the 1992 Constitution does not provide the manner in which the House should give approval to the President's nominees, the Standing Order of Parliament provides for the Appointments Committee, composed of the First Deputy Speaker as chairman and not more than 25 other members.

Therefore, Mr Ebo Barton-Odro, the First Deputy Speaker, who is also the NDC MP for Cape Coast North, will make his debut as Chairman when the Appointments Committee begins the vetting of the ministerial nominees today.

However, the Minority has given an indication that its members on the committee will boycott the sitting to vet the ministerial nominees because of the petition which the flag bearer of the New Patriotic Party (NPP) in the 2012 general election, Nana Akufo-Addo, and two others have filed at the Supreme Court.

The petition is challenging the Electoral Commission's (EC's) declaration of President Mahama as the winner of the 2012 presidential election.

As of the time of going to press, the Deputy Majority Leader, Mr Dominic Nitiwul, had told the Daily Graphic that the NPP stood by its decision not to "participate in deliberations and decisions on matters which will evaporate upon the cessation of President Mahama's administration after the Supreme Court has come up with its verdict in favour of the NPP".

Commenting on the decision of the Minority, Mr Cletus Avoka, a former Majority Leader, said if the Minority carried through its decision, then it would be unfortunate, since, throughout the history of the vetting process in the Fourth Republic, it was the members from the Minority side who had always provided the bite and gone the extra mile to exact information from nominees.

Through such diligence, he said, it was detected that Dr Ekwow Spio-Garbrah, who had once been nominated for a ministerial appointment by former President J.J. Rawlings, had not registered as a voter at the time he was nominated.