In Mali, locals queue to give blood for troops 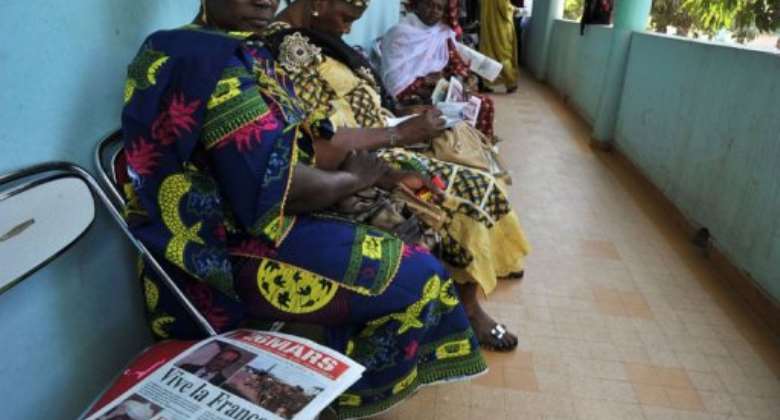 BAMAKO, Mali (AFP) - Scores of Malians lined up in the capital Bamako on Monday to donate blood for soldiers fighting a fierce battle against Islamist rebels occupying the north of the impoverished country.

From the early morning, answering an appeal from a coalition of 40 political parties and civil society organisations, scores of Malians and some French expatriates flocked to a blood drive at the city's Labour Exchange, where nurses collected the precious red drops from donors wanting to do their bit in what could be a protracted military operation.

Volunteers sat on folding chairs, watching as their little blood bags filled up slowly on small plastic tables next to them. The bags were then carefully stored in large blue coolers destined for the blood bank for testing before being sent on to hospitals.

Smiling despite the large needle sticking out of his arm, 38-year-old accountant Amadou Diarra said he was there to "help our soldiers and all the wounded in this just war".

"All the young, all the people of Mali were frustrated by the aggressions of the Islamist terrorists," he said. "Finally, the decision to attack them was made. I'm not a soldier, so this is my way to participate in the war effort."

Like many others at the blood drive, Diarra expressed his appreciation for French support in the conflict, saying he wanted to "thank and congratulate France for its sacrifices to save Mali".

"A French helicopter pilot is dead, we will never forget his sacrifice," he told AFP.

France, working alongside the Malian army, launched airstrikes against the Islamists on Friday as they threatened to advance on Bamako, after months of hesitation over an African intervention force to help drive out the extremists.

French pilot Damien Boiteux was killed when his helicopter was hit in battle Saturday -- France's only confirmed fatality so far.

Among those waiting to give blood Monday was Kadjaiou Coulibaly, a Malian lawmaker who is also vice-president of the coalition that called the blood drive, the United Front for the Defence of the Republic and Democracy.

"I'm here to support those fighting on the front," she said. "We are also going to raise funds to buy ammunition for our soldiers.

"The French intervention has saved our country," she added. "Our gratitude will be eternal."

By late morning, two French women, both in their 50s, had shown up at the blood drive. One of them, a teacher, was turned away because she did not meet the weight requirements.

"We're relieved," she said about the French military action, a sentiment she said is shared by the 6,000-strong French expat community in Mali.

"We knew that there was nothing between the Islamists and Bamako. The Malian army does not exist, the government was completely overwhelmed, nothing could stop them," she added. "Concern had been rising sharply these past days. Now, it's better."

"Thank you France, thank you to President (Francois) Hollande," he said. "It's necessary that the French army stays with us until the African force is organised and helps us defeat these bandits who claim to act in the name of Islam and dirty its name."

Ejisu Roman Catholic School gets water closet for the first ...
44 minutes ago