Man Killed For Raping A Cow In Kenya 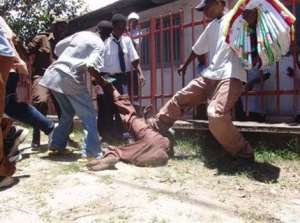 A 40-year old man was beaten by the public to death after he was caught red handed sexually assaulting a cow.

The cow owner said that he heard his cow mowing wildly and on checking he found the man mounting on his cow. The man had tied the cow's legs very tight to ensure it does not move.

The owner raised an alarm as he fought to contain the man and residents who arrived at the scene of the incident were shocked to find the naked man and the badly tied and injured cow.

The irate residents ascended on the man beating him with blunt objects and stones which led to his death.

While confirming the incident Kirinyaga OCPD Apollo Onyonyi condemned the residents for taking the law into their own hands and beseeched them to allow police to deal with criminals.

The man's remains were taken to Kerugoya Hospital mortuary.