Archbishop Of Canterbury Prays For Ghana

By THE GHANA HIGH COMMISSION, LODNON. 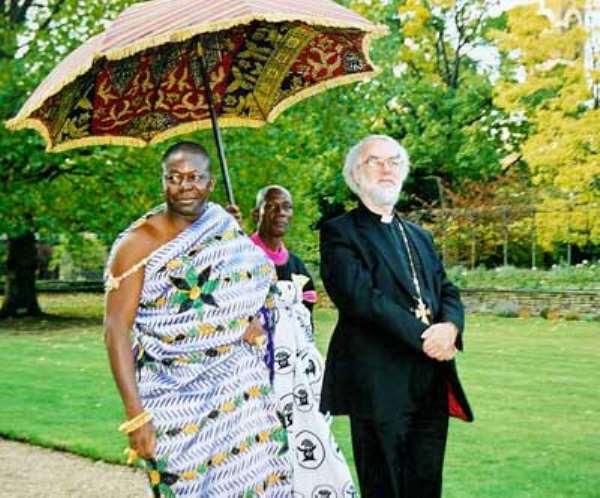 The Archbishop of Canterbury, His Grace Rowan Williams has prayed for continuous peace and justice in Ghana. He expressed the hope that the Almighty God would continue to bestow peace and prosperity to the nation and its people.

His Grace Rowan Williams made the intercession during a courtesy call on him by the Asantehene, Otumfuo Osei Tutu II at the Lambeth Palace in London.

The visit was to reciprocate a visit paid by His Grace Rowan Williams to Kumasi early this year, during which he paid a courtesy call on Otumfuo Osei Tutu II at the Manhyia Palace.

Discussions during the visit centred on issues of mutual understanding and concerns.

Accompanying Otumfuo were H.E. Mr. Isaac Osei, Ghana's High Commissioner to the UK and his Deputy Mr. Kwabena Baah-Duodu, Lady Julia Osei Tutu, wife of the Asantehene and some members of Asantehene's entourage who attended the just-ended Ghana Expo 2003.

After the discussions, His Grace Rowan Williams accompanied by his wife conducted Otumfuo and his delegation around the Palace.

Picturesque attractions within the Palace included the Great Corridor showing the portraits of Archbishops from the Victorian times (1414) to date, the Great Hall, the Guard room, the Library and the Chapel built in 1881 highlighting various artistic ceiling paintings.