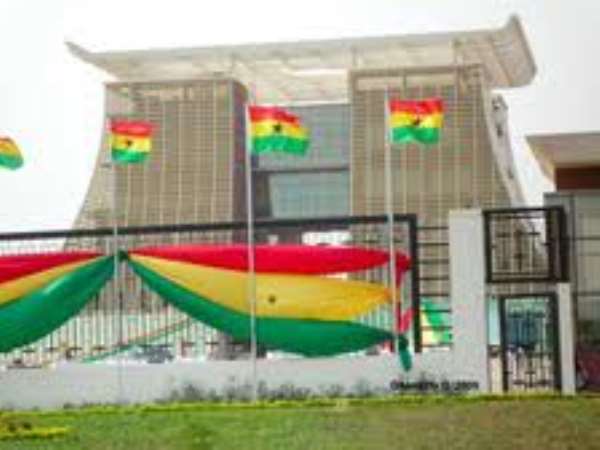 After a week of splitting hairs over the final resting place of the late President John Evans Atta Mills, the Funeral Planning Committee has finally settled on Jubilee House, which now spots the name Flagstaff House, after a midnight adventure.

The new resting place was announced by Mr. Kofi Totobi Quakyi, Chairman of the Funeral Committee, after a broad consultation with family members of the deceased and political gurus in the ruling National Democratic Congress (NDC).

There had been animated discussions on a final resting place for the Head of State and Commander-in-Chief of the Ghana Armed Forces, following the President's departure to the village.

Initial inclination was for the fallen President to be laid to rest at Jubilee House, but other permutations, including the call by family members to bring the corpse to Otuam, his native home, to lay him close to his ancestors.

Dr. Paa Kwesi Nduom, flagbearer of the Progressive People's Party (PPP), publicly opposed the idea of burying the President at the magnificent edifice built to serve as Government House, and sided with family members clamouring for the burial at Otuam, his ancestral hometown in the Central Region.

In the opinion of Paa Kwesi Nduom, the burial of the President in his hometown could serve as a tourist attraction and help revitalise the ancient town, now slipping into decay.

The PPP chief made the declaration after visiting the Odomna family (family of the late President) at the family house at Otuam, in the Ekumfi District of the Central Region

A number of other opponents of Jubilee House as the burial ground of the departed Head of State had argued that the late President did not find the edifice convenient enough to stay or work there while in office, and that burying him there would amount to gross disrespect for the dead.

Earlier, the family of the late President had threatened to go to court to place an injunction on his burial outside his natural home, insisting that custom demanded that they be allowed to take the decision on where and when to bury their departed relative.

They claimed that the family members had not been consulted on issues relating to the death and burial of the late Head of State.

The Jubilee House, which was constructed under the guidance of former President John Agyekum Kufour, with financial assistance from the India government to serve as the new seat of Government and residence of the Head of State of the Republic of Ghana, has had its fair share of controversy.

First, the then ruling New Patriotic Party came under heavy criticism from the then opposition National Democratic Congress, which charged them with misplaced priorities for constructing the edifice, when bread and butter issues were what mattered most to Ghanaians.

Some leading members of the then opposition NDC even declared the intention of the NDC in government to use the edifice as a state of the art poultry farm. Others spoke of turning it into a piggery.

The edifice, which housed ex-President Kufuor in his last days in office, was virtually left to gather weeds, until the Ministry of Foreign Affairs moved in, after fire gutted its offices.

Just when the controversies surrounding the Jubilee House seemed to have settled, The Minister for Water Resources, Works and Housing, Enoch Teye Mensah, stirred fresh controversies when he answered questions in Parliament concerning his ministry a few weeks ago.

Apparently, the NDC government had spent a total of GH¢121,443.71 to renovate Jubilee House.

Prominent among the breakdown in the expenditure on the renovation was that of a total amount of GH¢48,956.99 was used to fumigate the Presidential Palace without any official in residence.

With the decision to bury the late President at Jubilee House, political pundits are optimistic that the edifice would be put to proper use, by new President Mahama moving into residence.