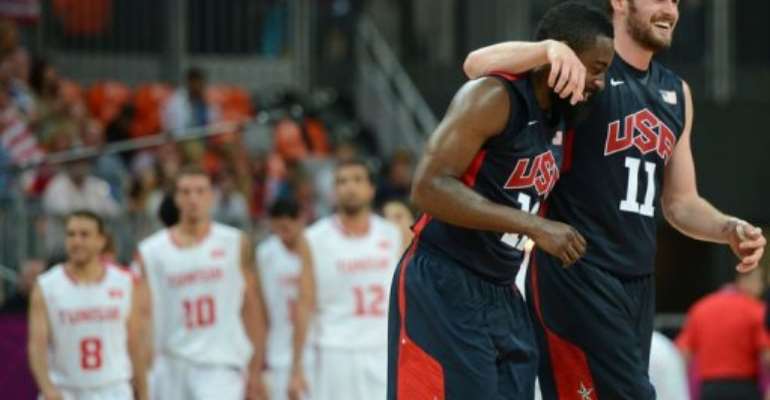 US forward Kevin Love (R) and US gard James Harden celebrate. By Timothy A. Clary (AFP)

LONDON (AFP) - With spectacular dunks and pressuring defence, the US Olympic team of NBA stars routed Tunisia 110-63 on Tuesday while France edged Argentina in a showdown of NBA teammates Tony Parker and Manu Ginobili.

Carmelo Anthony and Kevin Love each scored 16 points and US college star Anthony Davis, the No. 1 pick in June's NBA Draft, added 12 points with some high-leaping dunks to help the Americans roll to victory.

African champions Tunisia, led by Macram Ben Romdhane's game highs of 22 points and 11 rebounds, led 15-12 before the Americans scored the next 14 points to seize the advantage for good.

"We figured it out," Anthony said. "We didn't get worried. We knew we could take them."

Parker, playing against NBA San Antonio Spurs backcourt teammate Ginobili for the first time in their careers, scored 17 points to lead France over Argentina 71-64. Ginobili scored a game-high 26 points in a losing cause.

"After 800 games paying together, playing against each other was something different," Ginobili said. "When the ball is in the air you just try and compete."

Parker was the key to victory for France, scoring six points in a row after Ginobili pulled Argentina within 60-58, two of them on a layup when he sped past his helpless NBA teammate.

"It's a big win," Parker said. "Argentina is a very good team and hopefully we can build on that. It's awesome, I feel very proud. I've been working hard."

It was France's first victory over Argentina in five tries in Olympic and world championship competition.

Nicolas Batum added 14 points, Mickael Gelabale had 13 and Nando de Colo -- who will join the Spurs next season -- scored 11 for France, which moved level with Argentina, Nigeria and Lithuania at 1-1 in Group A behind the 2-0 US team.

"We have three more games," Argentina's Andres Nocioni said. "I think we keep moving forward and we'll have many chances to qualify without a problem."

The Americans next play on Thursday against Nigeria while France will meet Lithuania and Argentina will face Tunisia in other Group A matches.

Fernandez, just back after five months out with a back injury, took three stitches on the back of his head after hitting a photographer's camera when he fell under the basket going for a loose ball late in the first half.

The Spaniards, who lost to a US NBA squad in the 2008 Olympic final, were already without captain Juan Carlos Navarro. The 32-year-old guard who scored 14 points in a 97-81 victory over China was out with a left foot injury.

"He couldn't play," Spanish coach Sergio Scariolo said. "I don't know how many games he will miss."

Fernandez, who plays for the NBA Denver Nuggets, returned to play almost nine minutes of the second half, scoring 11 points.

"We need him in full shape if we want to compete at our best and the same with Juan Carlos."

In Group B, Spain, Russia and Brazil all share the lead at 2-0 with China, Britain and Australia each 0-2.

Spain will face Britain on Thursday hoping to jump to a quick lead.

The Australians face China on Thursday.

"We are in pretty good shape," Kirilenko said. "We've got a lot of confidence and momentum but it's not going to be easy."

Up next for the Russians will be Brazil, which missed 18 of its first 20 shots but still rallied to edge Britain 67-62 while Linas Kleiza scored 13 points to lead Lithuania over Nigeria 72-53.