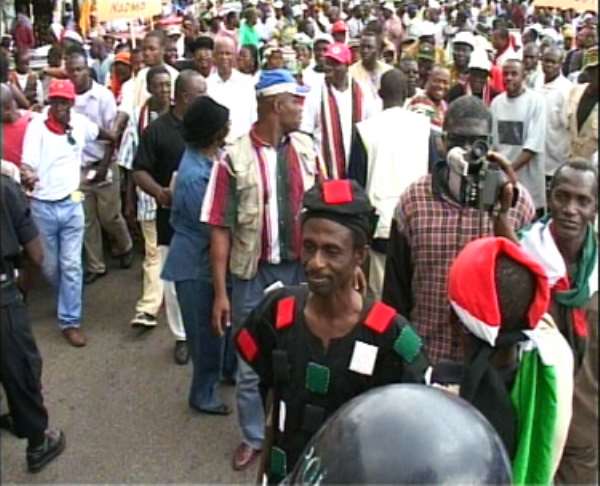 - Your gov’t can’t built the Bui Dam It has now been established that the plans of the ruling New Patriotic Party (NPP) to construct the Bui Dam to supplement the Akosombo dam would not come to fruition.

Quoting the Senior Minister, Hon. J.H. Mensah, the Member of Parliament for Wenchi West, Hon. Johnson Asiedu Nketiah, disclosed that the Senior Minister had told members of the Brong Ahafo Regional House of Chiefs in a meeting that his government cannot build the dam within the foreseeable future.

Hon. Nketiah, aka General Mosquito, said the senior minister, who is also the MP for Sunyani East, attributed the NPP government’s inability to build the dam to the fact that there are no drawings for the dam.

The MP said this at a press conference organized by the Brong Ahafo regional NDC caucus in parliament.

At the said meeting with the chiefs, which was attended by MPs from the region, he, Hon. Nketiah, challenged the Senior Minister, contending that, as a former chairman of the mines and energy committee, he was aware that drawings for the dam are available.

According to Gen. Mosquito, the design for the dam was prepared a very long time ago, even before the first president, Dr. Kwame Nkrumah.

He said after the old plan, which drawn by the colonial masters, a new plan was designed by one Dr. S.B. Arthur.

Hon. Nketiah has therefore asked the NPP government to come out with a better excuse than attributing their failure to drawings, after using public monies to send “what they described as prospective investors to the dam site.”

He said the NPP promised to bring in competent contractors to build the dam, only to finally abandon the project after succeeding in raising the morale and aspirations of the people of Brong Ahafo and the country as a whole.

On the murder of Ya-Na, the King of Dagbon, Hon Nketiah told the press that it was a continuous business from the regime of Dr. Abrefa Kofi Busia.

He revealed that immediately the Afrifa handed over to Dr. Busia, soldiers in the military uniform went and attacked the Ya-Na.

“Since the NPP government has taken over, and they are from the UP family, they have to under-take the job by killing the king.

He said the setting up of the Wuaku Commission to investigate the killings of the king and the 40 others wase only a strategy to throw dust into the public’s eyes and to waste the taxpayers’ money.

According to the MP, the types of people appointed to take the investigative duty at the commission were not ones that could come out with anything meaniful to the nation.

“Up to now, no one has been arrested by the security,” he said, asking “Does it mean that Ya-Na killed himself or what.”

Hon. Nketiah told the press that the government wants Ghanaians to believe that the death of the Ya-Na and the 40 others was the result of a war between the Abudus and Andanis.

On why the minority MPs boycotted the discussions on the National Health Insurance Scheme (NHIS), Hon. Nketiah explained that they were not called off from the recess to debate on it, but to debate on the security of Dagbon.

He said the NDC government has the scheme at heart; but there was the need to handle it perfectly to avoid any problem in future.

He indicated that NDC started the programme, which the NPP has followed suit, and aksed why they should kick against something they had decided on.