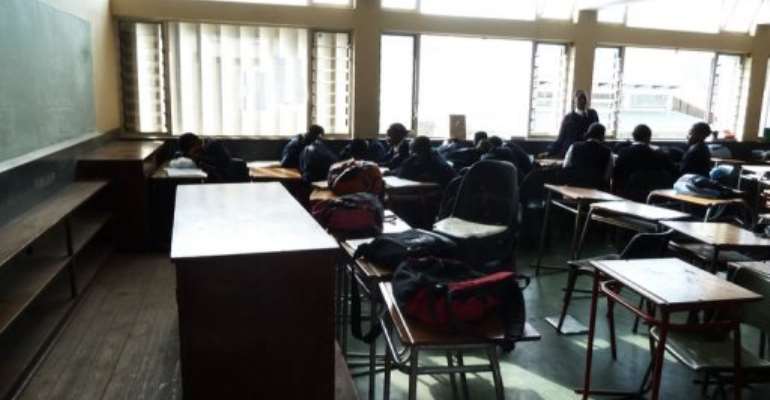 A group of pupils laugh, play or sleep in an empty geography class at St. Mark's High School in Mbabane on July 24. By Johannes Myburgh (AFP/File)

MBABANE (AFP) - In the geography class at St Mark's High School, boys play chess on a board scratched onto a workbench in one corner, while in another a girl knits a scarf while her friends gossip.

Swazi teachers have been on strike for more than a month, but so far their abandoned classrooms are the only tangible result of a movement that wants not just salary increases but democratic reforms in Africa's last absolute monarchy.

"Our ultimate goal is democracy," said Sibongile Mazibuko, president of the Swaziland National Association of Teachers, who see King Mswati III as the country's biggest problem.

"He creates the poverty himself."

Teachers went on strike on June 22 demanding a 4.5 percent salary increase. Other public servants joined briefly, but the movement is stuttering after nurses returned to work on Tuesday following a court interdict.

Sporadic protests have drawn hundreds into the streets, where police greet them with rubber bullets, water cannons and batons. Now most teachers go to school only to sign attendance registers, but still don't teach.

"The protests have become unsustainable. We are looking at stayaways, picketing on the premises," she said.

Their financial demands are modest -- they want a 4.5 percent raise, while inflation is around nine percent. It's their political demands that roil the palace, which like to paint a picture of traditional mountain kingdom where the monarch is revered by his subjects.

That image has faded as pro-democracy protests mushroomed over the past year, sparked by a crippling financial crisis.

The International Monetary Fund has urged the government to slash its public wage bill as the economy stagnates, but has pulled its team from the country after the kingdom made no progress on reforms.

Striking teachers have had their salaries slashed as authorities retaliate against the strikes, receiving as little as 30 emalangeni for their last paycheck.

Some were handed dismissal letters and threatened with jail for contempt of court if they didn't report to work, said government spokesman Percy Simelane.

"Even if money could come now it would be very difficult to increase salaries," he told AFP. "We need to adhere to this advice or sink."

Teachers point to a 30 percent increase lawmakers awarded themselves in 2010.

"If you've paid yourself so much, why can't you pay them?" asked Mazibuko.

"They will not invest in educating kids for the poor," she said.

Public servants also blame the lavish lifestyle of Mswati and his 13 wives. Forbes magazine rates him as among the world's 15 richest royals, keeping each wife in her own palace.

This week opposition groups claimed three of the queens and an entourage of 66 would travel to Las Vegas for a holiday.

The lawmakers' big paychecks "could be contributing towards the hefty salary bill that we have," Simelane said. "If it is not (withdrawn) amid the outcry... discontent will be very rife."

But he insisted democratic reforms were not necessary.

"We are one of the most democratic societies in the region," he said.

"The king loves his people. I don't think he can create conditions where people go hungry," he said.

About 60 percent of the tiny country's 1.1 million people live on less than $2 a day. The UN World Food Programme says one-fifth of the country experienced food shortages this year.

"In most cases provocation of some kind came out," he said. "We have one of the most disciplined police forces in the region."

"They normally don't shoot to kill."

Life in Swaziland continues despite the school groundings, the tiny country's troubles far from the international spotlight.

Other government workers are also demanding raises, but generally are not downing tools.

But Mazibuko is adamant that growing awareness will see her movement succeed.

"Little by little people are seeing the light," she said.