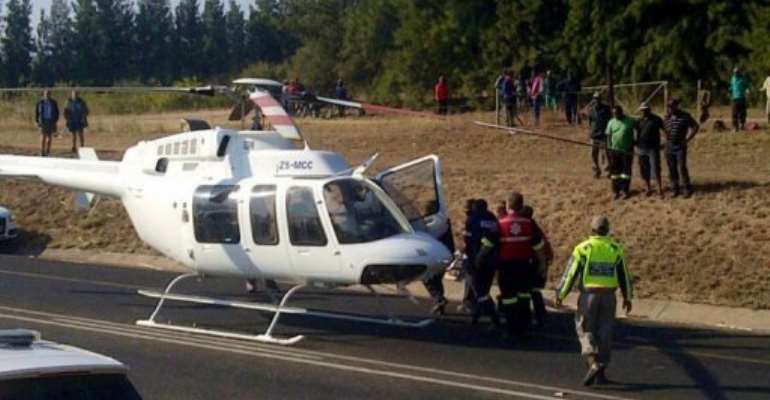 Victims are airlifted by helicopter from the site of a train crash in Malelane. By (AFP/ER24)

JOHANNESBURG (AFP) - Twenty-six people were killed in South Africa on Friday when a goods train ploughed into a truck carrying farm workers at a level crossing, officials said, raising an earlier toll.

The train transporting coal to Mozambique collided with a four-tonne truck and dragged it down the tracks, leaving dismembered bodies in its wake in what rescue officials described as a gruesome scene.

The accident occurred shortly before 7:30 am (0530GMT) near the town of Malelane in the eastern province of Mpumalanga, south of the famed Kruger National Park.

Earlier an emergency official said the toll stood at 20, with 19 dying on the scene and one more later in hospital.

"As far as I know this is the worst rail accident in our region since 1994," said Joseph Mabuza, spokesman for the provincial department of community safety.

The truck was carrying more than 40 farm workers and two dozen of them suffered severe injuries. Some were airlifted to hospitals, with the death toll initially estimated at 30.

"It would appear as if the truck driver may have crossed the railway line without having a proper look-out and as a result the train hit him and then pulled him for about a kilometre to two kilometres," said Thulani Sibuyi, head of the province's community safety department.

"The bodies are lying all over the scene. People torn apart and so forth."

A woman at the scene described the aftermath to local radio, saying: "You can smell blood. There are bodies everywhere. It's a very gruesome sight."

The driver of the truck survived the crash.

"It is understood that a coal train consisting of four locomotives and 39 wagons... collided with a four-tonne truck," said Sibongiseni Hena, the spokesman for the railway safety regulator.

Police said the driver had been detained and would likely face a charge of culpable homicide.

Railways and freight rail in South Africa are owned and operated by Transnet, the state-run transport and logistics company.

The firm said in a statement that the driver of the truck had failed to stop at a level crossing.

"The accident also points to the need to re-examine all railway level crossings to make sure that drivers are fully aware of the approaching hazard," it said in a statement.

This year a court handed a 20-year prison term to a Cape Town minibus taxi driver who ignored safety signals at a railroad crossing and was hit by an oncoming train, killing 10 school children.