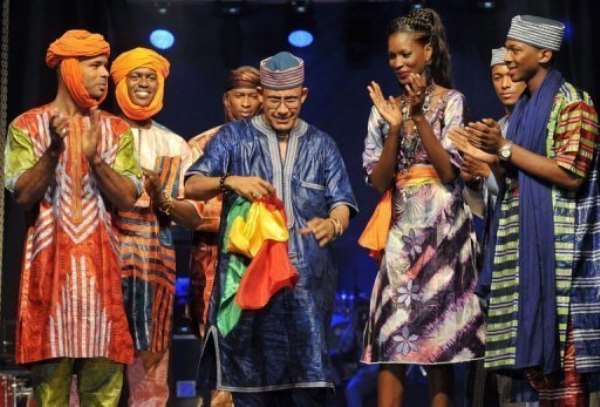 DAKAR (AFP) - The Sahel's most feted fashionista, Tuareg designer Alphadi, hit the runway at Dakar Fashion Week with a homage to Mali, whose vast north is largely under control of hardline Islamists.

The bright colours, occasionally bare arms and sparkle that sashayed down the catwalk were definitely not in keeping with sharia, the strict Islamic law that has been enforced in northern Mali for the past two months.

"That's the idea," laughed the man who was introduced to the crowd at the final show of the 10th annual Dakar Fashion Week on Saturday night as the "Magician of the Desert".

Alphadi was born in the fabled city of Timbuktu, an ancient trading hub, intellectual centre and popular metaphor for a mythical faraway place.

But since jihadists exploited a political vacuum following a coup d'etat and planted their ominous black flags in the town in late March, tens of thousands have fled and those that remain have to follow strict Islamic law.

Women have to wear veils and are not permitted to wear trousers, smokers are flogged and cigarettes and alcohol destroyed.

"It shocks me," Alphadi said in an interview with AFP on Sunday.

"Timbuktu has always been a secular town, everyone living together, sharing, blacks and whites, very cosmopolitan. A mysterious town!"

The 55-year-old, whose full name is Sidahmed Seidnaly, moved to Niger with his trader parents aged 13 which is where his brand rose from the arid, dusty edges of the Sahara desert to find fame in fashion capitals New York and Paris.

"The situation in Mali affects me deeply, I am Malian of origin, it cannot continue like this," said Alphadi, effusing about politics while simultaneously directing assistants, models and greeting passers-by.

Through his "fashion for peace" designs, made by Malian artisans and featuring hand-dyed polished cotton known as bazin, Alphadi wants to unveil Mali's creativity which he says should not be stifled by sharia.

He showed voluminous bazin skirts, shoulderless tops accessorised by a glittery wisp of fabric which could graze the hair and fall over the shoulders as an afterthought of a veil, or be used as a shawl.

At the end of the show Alphadi surged to the front dressed in shiny red, gold and green, carrying a large Malian flag in the same colours.

Mali's woes began in January when Tuaregs launched a decades-old bid for independence in the north. Alphadi agreed his people had been ignored for decades by Bamako, but said splitting Mali in two could not be the answer.

Mali's army was overwhelmed by the Tuareg rebels who brought weapons back from Libya's recent war, and staged a coup on March 22.

With the north barely protected, the Tuaregs quickly seized the main towns.

At their flanks were the Islamist group Ansar Dine, or Defenders of Faith, backed by Al-Qaeda in the Islamic Maghreb (AQIM) who soon took the upper hand and have had a fractious relationship with the secular Tuareg.

Another Malian designer Mariah Bocoum is from Bamako where she and her children were holed up in the days after the coup, smelling gunpowder and hearing shots fired around the capital.

She was inspired to do a five-piece mini-collection.

A form-fitting green dress with green beret cocked on the model's head symbolised the low-ranking putschists.

A similar outfit with red belt and red beret symbolised the former regime, which was protected by paratroopers who attempted a counter-coup.

"The three others represent the Malian population as I would like to see it, full of colours which express joy: Blue, green, orange, yellow," said Bocoum.

"It is an invitation to get rid of this hate we have for each other. Green beret against red beret, some Tuareg against the southerners and vice versa. My dream is to see these people hand-in-hand so we can save our country from the Islamists."