GSS Gets Funds For Development 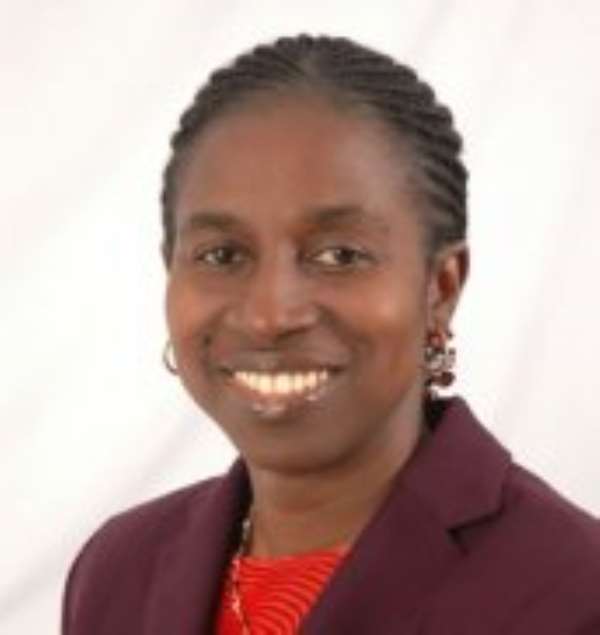 Dr Grace Bediako- Government Statistician The Ghana Government and the World Bank have approved US$ 40 million for the Ghana Statistical Service (GSS) to support statistical development in the country.

The fund will be used to provide statistical infrastructure, and to conduct national surveys among others.

The Government Statistician, Dr Grace Bediako announced this at a forum on the Western Region Human Development Report in Takoradi.

The two-day forum was under the theme: 'Human development in Ghana's Western Region: Managing development opportunities for a secure future'.

She stressed the need for the establishment of a data base and data management, explaining that the 2010 Population and Housing Census provided some data but there was the need to go further.

She further explained that the GSS had produced enough data but few researchers and order users were using them, and that there was the need to get the people interested in using the data.

Dr Bediako said there were a number of surveys planned over the next five years, and beyond, as part of the implementation of the Ghana Statistics Development Plan (GSDP).

In the immediate term, she said there should be more specific data from the survey enquiries, such as the on-going Multiple Indicators Cluster Survey, the Planned Labour Force and Child Labour Survey, the Ghana Living Standard Survey (GLSS), and the Agricultural Census/Survey.

Dr Bediako pointed out that the training and institutional capacity building activities that were programmed in the context of the GSDP, would also ensure the required levels statistical and analytical capacity were attained to undertake regional human development reports at the regional level.

'These interactions will also provide the platforms and avenues for the harmonization of the data collection instruments, concepts and methods, as well as the adoption of common classifications used within the national statistical system (NSS), including those adopted by the ministries, departments and agencies (MDAs) and the metropolitan, municipal and district assemblies, in the production and dissemination of statistics', she said.

Dr Bediako said improved access to data was also key to fulfilling the goal of regional and district level data analysis, adding that under the joint UNDP/UNFP/UNICEF annual work programmes on data dissemination and statistical literacy, the compilation and presentation of statistical indicators was emphasized.

'We have systems in place to help make micro-data available to researchers and other users on a wide scale, policy relevant indicators are made available through the GhanaInfo platform, while training in the preparation of statistical products in user-friendly formats, for the wider public is promoted', she said.

Dr Bediako said the 2010 Population and Housing Census was being processed and that every metropolitan, municipal and district assembly, would have as much information about the population and housing characteristics, as well as community facilities, as could be derived from the census questionnaires.

She stressed that the districts required data and statistical teams that could provide them with the relevant indicators and their analyses for the effective planning, monitoring and evaluation of their programmes.

The Western Regional Minister, Mr Paul Evans Aidoo noted that the need for the region to compile such a report had been long overdue.

He said although all the metropolitan, municipal and district assemblies had prepared Medium Term Development Plans to guide their respective jurisdictions, the plans mostly focused largely on physical infrastructure, and that there was a wide gap that the Western Regional Human Development Report intended to fill.

Mr Aidoo said the document would provide a comprehensive and credible basis for policy makers to enable them to track the impact of resources including oil and gas exploration and exploitation on the well-being of the people, particularly in the region.

He said this would involve the establishment of a credible data as the country continued the exploration of oil and gas and thus, would give clues to policy analysts to comprehensively digest on the varied dimensions of human development in the region.

The UNDP Resident Representative and Resident Coordinator of the United Nations (IUN) in Ghana, Ms Ruby Sandhu-Rojon said the Western Region Human Development Report identified some of the key elements that affected human development, such as poverty, vulnerability, capacity, human security, employment, livelihoods, governance, and the management of the environment , and resource curse on how they were inter-related.

She stressed that the challenge was to ensure that Western Region no longer continued to lag behind.

She emphasized that if the recent discoveries of oil and gas in commercial quantities were to benefit the country as a whole, part of that benefit needed to show up in significant improvements in the well-being and welfare of the region's residents.

Ms Sandhu-Rojon said the UNDP was particularly interested in seeing the region accelerate its rate of progress in achieving the Millennium Development Goals.

'It is not long until 2015 and the region has some distance to go in meeting targets for poverty, hunger, child survival, maternal health, water and sanitation, and education attainment', she added.