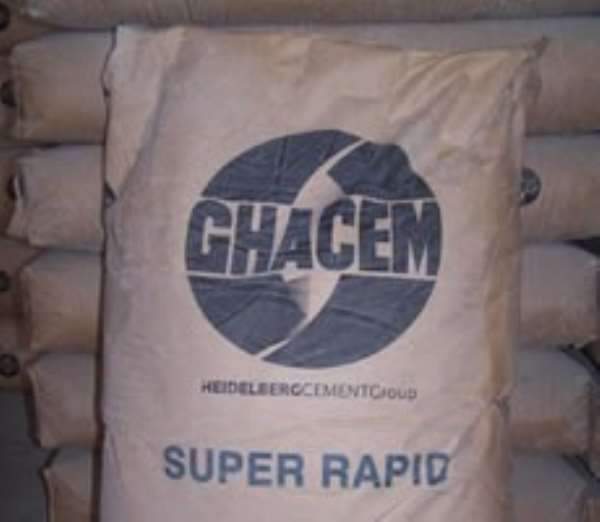 There is an acute shortage of cement on the local market with distributors and retailers taking advantage of the situation to sell the commodity at very exorbitant prices to reap abnormal profits.

The shortage, which has been caused by the shutting down of Diamond Cement Ghana Limited at Aflao, has pushed up the ex-factory price of a bag of cement from GH¢13.40 to a retail price of GH¢25.

While GHACEM, which holds a 55 per cent share of the cement market, insists that the company is still producing at full capacity and the price remains the same, Diamond Cement with 35 per cent market share, has been out of production for the past two week as a result of the breakdown of one of its transformers at Aflao.

Greenview International, which imports Dankote Cement and packages it locally, is also unable to produce because it does not have raw materials.

According to an official of the company, the importation and packaging of Dankote Cement were likely to resume shortly.

The non-availability of the 35 per cent production by Diamond Cement has created the room for cement dealers to manipulate the price of the commodity to their advantage.

According to the Strategy and Public Affairs Director of GHACEM, Dr George Dawson-Ahmoah, the company was currently producing at full capacity of one million metric tonnes of cement weekly.

He said since February this year, there had not been any upward adjustment in the ex-factory price of GH¢13.34.

He said GHACEM had invested more funds in the factory by increasing its capacity to meet the increasing market demand and was currently embarking on an expansion project which would increase the capacity to 2.2 million metric tonnes of cement a week.

Dr Dawson-Ahmoah indicated that the capacity of the company's plant in Takoradi would also be increased to 1.2 million metric tonnes of cement per week, thereby bringing the total production of cement to 3.4 million tonnes per week.

For his part, an executive member of the United Distributors Association, Mr Sai Issah, explained that the ex-factory price of GHACEM cement still remained GH¢ 13.34 and the margin for distributors was 60Gp, bringing the retail price of cement to GH¢14 per bag.

He said transportation of the product from the south to the north attracted a fee of GH¢4, thereby raising the price to GH¢ 18 in the north.

He said the market price had remained stable until Diamond Cement shut down its production plant as a result of the recent storm which destroyed its transformer, while Greenview International had also run out of raw materials.

The President of the Ghana Real Estate Developers Association (GREDA), Dr Alex Tweneboah, said retailers were now rationing the product as a result of the shortage, leading to the laying off of the workers of some construction companies.

Meanwhile, Victor Kwawukume reports from Aflao that the Head of the Commercial Unit of Diamond Cement Ghana Limited at Aflao, Mr Arden Boakye, has told the Daily Graphic that the factory is expected to return to normal production by this weekend.

That, he said, followed four weeks of shutdown due to the destruction of the transformer that supplied power to the factory and Aflao.

He said the transformer was hit by lightning during a rainstorm on April 26, this year, destroying it completely.

The Ghana Grid Company (GRIDCo) is currently running test transmissions on a new transformer that was recently installed.

Mr Boakye confirmed the test transmissions and expressed the hope that the factory would return to normal production by the weekend.