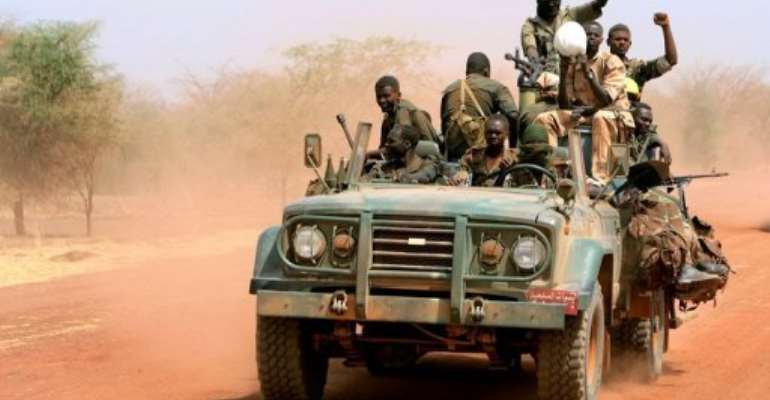 Sudanese soldiers ride in a military vehicle in the oil region of Heglig in April 2012. By Ashraf Shazly (AFP/File)

KHARTOUM (AFP) - South Sudan has not stopped hostilities in line with a UN resolution because it continues to "occupy" points along the disputed border and will be expelled by force, Sudanese officials said Friday.

"From our side the government is committed to the UN Security Council resolution by stopping hostilities," army spokesman Sawarmi Khaled Saad told AFP ahead of a 1500 GMT UN deadline to stop fighting or face possible sanctions.

Both Khartoum and Juba have pledged to seek peace after the UN Security Council on Wednesday gave their two countries 48 hours to stop fighting, including Sudanese air raids which it condemned.

The border situation is a serious threat to international peace and security, the UN said.

"But the other side still has a presence inside our land," Saad said, alleging that the Southern army continued to occupy two points along the border with Darfur, "and this means they haven't stopped hostilities."

The claim was in line with comments by Sudanese officials since Southern troops ended a 10-day occupation of Sudan's main oil region of Heglig last month -- an occupation equally condemned by the United Nations as Sudan and the South went to the brink of all-out war.

Sudan has repeatedly stated that South Sudanese "aggression" continues in the form of direct occupation of other disputed areas along the border, and by support for rebel groups inside Sudan.

"We are not now conducting hostilities inside South Sudan but on our territory we will not halt the fighting until South Sudan's troops withdraw," foreign ministry spokesman Al-Obeid Meruh told AFP shortly before the UN deadline.

Sudan accuses the South of backing anti-government rebels from its conflict-hit western region of Darfur as well as those fighting in South Kordofan state and Blue Nile.

The Sudanese Media Centre, which is close to the security apparatus, reported late Thursday that the army had regained control of Bau town in Blue Nile, but rebels of the Sudan People's Liberation Movement-North (SPLM-N) denied losing control of the area.

Within a week the army will seize the rebel base of Kauda, Bashir vowed on state television.

"Next Friday we will pray in Kauda so as to cleanse South Kordofan of rebellion," he said in an address to troops in Talodi.

South Sudan rejects allegations that it backs the SPLM-N and other opposition movements inside Sudan and in turn accuses Khartoum of supporting rebels south of the border.

Under the Security Council resolution, Sudan and South Sudan are required to stop supporting insurgents in each other's territory.

An international analyst, who asked not to be identified, said that "in principle" Khartoum is committed to the UN resolution and an African Union demand that formed the basis of it.

But Sudan is wary of the UN threat of sanctions, he said.

"They don't think it's their fault, so they don't see why sanctions should be on them," he said. "And they are actually trying to get rid of the old sanctions."

Sudan is already under United States economic sanctions, first imposed in 1997 over human rights and other concerns.

Border clashes between the two nations began in late March, culminating in the South's occupation of Heglig, a move which coincided with air strikes against the South.

The South said it pulled out of Heglig in response to international calls, but Sudan said its military forced out the occupiers.

Allegations of clashes have continued even after the Heglig occupation ended.

The UN resolution set a series of deadlines, including a resumption of negotiations within two weeks on issues left unresolved after South Sudan separated last July following a 22-year civil war.

These issues include oil payments, the status of each country's citizens resident in the other, disputed border areas, and the contested Abyei region.