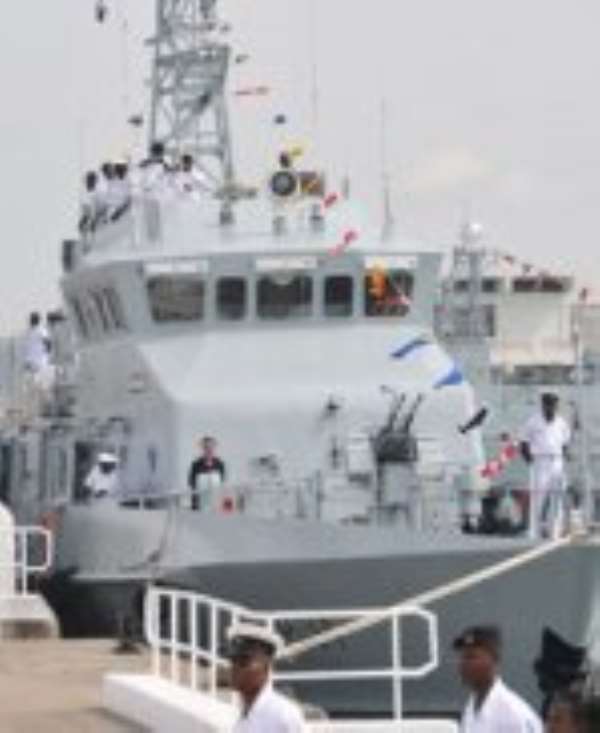 President John Evans Atta Mills has commissioned four new vessels for the Ghana Navy, the first in 32 years, and underscored the need for the country to secure its maritime domain for its future socio-economic development.

He said Ghana’s maritime environment abounded in diverse resources, including minerals, oil, gas and various species of fish, which needed to be protected for the economic development and livelihood of the present and future generations.

Commissioning the vessels at the Home Port of the Western Naval Command in Sekondi, President Mills said with the increasing incidents of piracy and other related maritime crimes, “we have no option but to equip our Navy to be able to guarantee a secure environment where all legitimate entities can operate freely without hindrance”.

The vessels are fast patrol boats fitted with equipment to carry out various operations.

They were built by Poly Technologies Incorporated Group in the Quindao Shipyard in China according to specifications by the Ghana Navy.

The ships have been named after venomous snakes in the country’s local languages.

They are the Ghana Navy Ship (GNS) Blika (blika is a Ga-Dangme word for the cobra), the GNS Garinga (garinga is a Dagbani word for the venomous viper), the GNS Chemle (chemle is an Ahanta word for the black mamba, the longest venomous snake in Africa), and the GNS Ehwor (ehwor is an Ewe word for the python.)

As part of the commissioning ceremony, the President boarded the GNS Blika and went on a one-hour sea trip against the backdrop of dancing and singing by a number of National Democratic Congress (NDC) faithful.

The President was accompanied by some Members of Parliament and other guests.

President Mills said with the addition of the four ships, the Navy should be in a position to maintain continuous presence at sea.

“In a similar collaborative effort, the Ministry of Transport, the Ghana Maritime Authority and the Ministry of Defence are establishing a Vessel Traffic Monitoring Information System (VTMIS) along the entire coast of Ghana,” he said.

That, he said, would include coastal radar stations with command and control centres that would enhance the ability to maintain effective surveillance over the country’s territorial waters.

He said when that system was fully established and complemented with Naval ships and maritime patrol aircraft, “we should be able to improve our operational control of our maritime domain”.

The President also announced that in the course of the year, the government would take delivery of two refurbished ex-German Navy Fast Attack crafts currently undergoing refitting in Germany.

“Also in the course of the year, the slipway rehabilitation project carried out by Messrs Damen of The Netherlands and the MTU Test Bench Project by MTU of Germany will be completed and commissioned,” he said.

Those projects, he said, would enable the Ghana Navy to carry out routine docking and periodic refitting locally to save the millions of foreign exchange usually spent when such works were done abroad.

“As Commander-in-Chief, and as I stay committed to building a better Ghana, I will not relent in my efforts to fully equip the Ghana Armed Forces and other security agencies to enable our men and women in uniform to derive maximum satisfaction from their chosen fields of engagement,” President Mills promised.

The Minister of Defence, Lt Gen Joseph Henry Smith, for his part, said the addition of the vessels would bring a new life to the Ghana Navy.

He said the country’s security, especially at the oil fields, vis-à-vis the logistical challenges confronting the Navy, had been a serious concern to all, hence the joy to see those additions as a solution to the problem.

The minister said the government felt the need to equip the Ghana Navy in order to be able to provide the much-needed security for the country’s maritime domain.

“The government has put in place a plan to revamp the Navy to enable it to achieve its objectives and what we are seeing today is a partial fulfilment of its commitment to ensure that all the security services are properly equipped to perform their roles effectively,” he said.

He said the snake-class vessels could not have come at any better time than now as they had given the country the hope that its maritime resources would be jealously guarded.

The Minister of Food and Agriculture, Mr Kwesi Ahwoi, said the last time the Ghana Navy received new vessels was 32 years ago.

He said more than 2.2 million Ghanaians benefited directly and indirectly from the products of the sea, adding that fish represented 60 per cent of the protein consumed in Ghana.

For his part, the Chief of the Naval Staff, Real Admiral Mathew Quarshie, commended the government for the fleet and said the Ghana Navy was delighted.

He said it was pertinent to mention that the Ghana Navy was the hub around which the defence of the maritime domain of Ghana revolved, adding, “Naturally, the spotlight has been on the Navy to provide the necessary safety and security at sea.”

“However, with the ageing and dwindling fleet, the Navy was not well postured to adequately meet the challenges of ensuring safety and security in the 64,000 square nautical miles exclusive economic zones,” he said.

Present at the ceremony were the President of the Poly Technologies Incorporated Group, Mr Zhao Zigao, Service commanders, chiefs, representatives of the various political parties, ministers of state and the officers and men of the Ghana Navy.