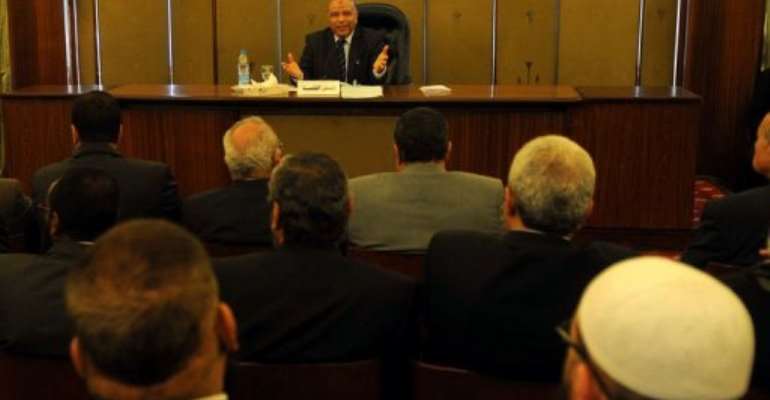 Saad al-Katatni (C) was chosen as head of the constituent assembly. By Mohammed Hossam (AFP)

CAIRO (AFP) - Members of a disputed panel drafting Egypt's new constitution elected an Islamist as its head on Wednesday, intensifying a stand-off with secularists over the country's post-revolution charter.

Saad al-Katatni, a member of the Muslim Brotherhood and the current speaker of the Islamist-dominated parliament was chosen as the head of the constituent assembly, during its first session.

The panel, which is made up of more than 60 percent Islamists, has been at the centre of a dispute with the country's secular forces who fear their calls for a civil state will be muffled.

Katatni's appointment comes after liberal, leftist and independent parties and figures angrily withdrew from the committee, accusing Islamists of monopolising the process.

Only 74 of the 100-member panel attended the first session, with 71 voting for Katatni, the official MENA news agency reported.

The constituent assembly's legitimacy was further called into question after Egypt's Supreme Constitutional Court announced it was withdrawing its representative from the panel earlier on Wednesday.

The crisis comes at a critical time in Egypt's transition, with the first presidential elections since a popular uprising ousted veteran leader Hosni Mubarak less than two months away.

The revolt paved the way for the formation of dozens of political groups and movements of all political stripes, but it is the Islamists -- the most organised and with a wide network of supporters-- who have gained the most since the revolt.

The Muslim Brotherhood and the ultra-conservative Salafist Al-Nur party together went on to dominate both houses of parliament in recent parliamentary elections, sparking fears among secularists and the Coptic minority of restrictions on freedoms.

Last week, parliament voted for the constituent assembly to be made up of 50 lawmakers from the upper and lower houses of parliament, and 50 public figures.

But secular politicians and activists argued that such a high proportion of legislators gave Islamists too much control of the constitution.

After voting on Saturday night, the 100-member panel was made of up more than 60 percent Islamists, and included five women and six Coptic Christians.

On Wednesday's sessions, the members of the panel sought to reassure the public, insisting that the constitution would be for all Egyptians.

Writing the constitution requires "wisdom and political responsibility, away from partisan gains," Katatni told the constituent assembly in its first session.

Others said the withdrawals would not affect the order of business, since legislators had drawn up a list of back-up members.

It was not clear what percentage of withdrawals would invalidate the panel.

Several lawsuits were filed by legal experts challenging the validity constituent assembly, with one argument being that a constitution cannot be drafted by those whose role it will define.

Protests on Tuesday and Wednesday have called for the dissolution of the panel, demanding it be made up entirely of non-parliamentarians.

The recent debate over the panel "has cast a heavy cloud of doubt and confusion over its members, and cast a dark shadow of (legal) challenges to (its) formation and procedure," the Supreme Constitutional Court's spokesman, Judge Maher Sami, told reporters.

He said the court had decided to steer clear of any disagreements or clashes caused by this doubt, prompting it to withdraw Saleh from the constituent assembly after he was elected a member.