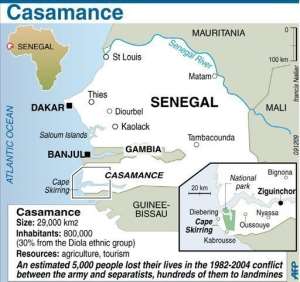 The soldiers were attacked as they came upon rebels "who were in the process of committing a hold-up" north of Casamance's main city Zinguinchor, and in the ensuing firefight "we recorded one death and four injuries," an officer said.

The incident occurred between Diouloulou and Bignona and was confirmed by another military source.

A resident of a village near the scene of the shootout said the rebels were extorting money from people travelling on the road. When an army vehicle passed, they shot at the soldiers.

The Casamance Movement of Democratic Forces rebel group has been fighting since 1982 for the independence of the province.

Casamance, a region geographically separated from the north of Senegal by the Gambia and renowned for its tourist beaches, has known periods of calm since 1982 and spells of heavy fighting. Several peace pacts have been signed but never implemented.

The conflict has intensified since November last year. Over three decades, the fighting has claimed thousands of victims, including civilians, but no precise casualty toll is available.

On March 11, three soldiers were killed and four wounded in a rebel ambush east of Zinguinchor.