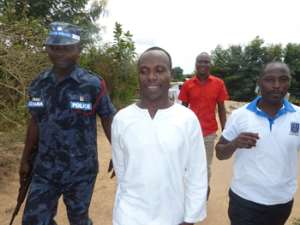 The founder of God's Power Ministry at Edina Essaman in the Komenda-Edina-Eguafo-Abrem (KEEA) Municipality of the Central Region, Kwaku Awotwi, has been arrested by the Elmina District Police Command for allegedly kidnapping a 25-year-old member of the church, Esi, also known as Nhyira.

Esi, according to police, had been in the pastor's room for almost four months. She took her bath and even attended to nature's call in the room because she could not go out due to 'spiritual reasons'.

Pastor Awotwi, 35, who is a native of Bandoh near Breman in the municipality, was arrested early on Monday morning after the police had read about the incident on the internet.

According to the pastor, Esi could not go out because the Holy Ghost had asked her not to do so until she was instructed to. He added that the day Esi stepped out would be the end of the world hence the need for mankind to change.

The police and some media houses in Cape Coast stormed the pastor's premises and realised that Esi had grown pale as if she was pregnant and could not walk due to her being indoors all the time.

Speaking to the police and the press, Esi said she was brought to the pastor by her mother, Ekua Ahema, about a year ago for spiritual cleansing because whenever she gave birth, her child did not survive.

According to Esi, it was through the prayers that the Holy Ghost revealed to her to be indoors until she was asked to go out.

Esi, who claimed to have been a bread seller in Accra, stated that the Holy Ghost spoke to her and that there was no need for her to go to the hospital even though she was not feeling well because it was the Holy Ghost doing wonders in her body.

The mother also confirmed that she was the one who took Esi to the pastor since Esi was her only child and could therefore not allow her to lose the children she delivered, without doing anything about it.

She disputed the allegation that the pastor had kidnapped her daughter, adding the pastor even gave her meals and was only giving her spiritual guidance.

Some residents who spoke to DAILY GUIDE on anonymity claimed the pastor was lying and that he was having an affair with Esi, hence his decision to keep her in his room.

The residents noted that even though the pastor had only two rooms which he shared with his wife and children, he still allocated one to Esi alone where he had special prayers with her.

Some of the residents alleged that Esi was pregnant for the pastor that was why she was pale.

Sources close to the police said Pastor Awotwi could not be charged for kidnapping since both Esi and the mother agreed to allow her to stay with the pastor.

The source said investigations would still continue to ascertain the truth of the matter.