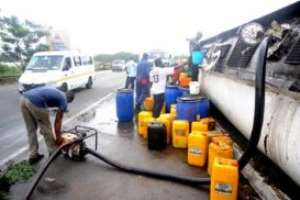 Hundreds of residents of some communities along the Mallam-Kasoa Highway in Accra, Monday morning abandoned every engagement to fetch spilled palm kernel oil from a tanker which had been involved in an accident on the highway.

The residents mobilised big and small drums, gallons, bowls, buckets and any available receptacle to fetch the oil from the tanker, while others stormed the gutters and drains around to scoop the spilled oil.

Many of them had abandoned their jobs for the day to make time for what they considered to be a God-send economic fortune and did not care about the economic misfortune that had hit the owner of the spilled oil.

A large number of hawkers who ply their trade at the toll booth also abandoned their wares to join the oil scoopers.

Even as they scrambled for the palm kernel oil, many of them were confused about the kind of oil it was and whether the product is edible or meant for the manufacture of soap.

That confusion notwithstanding, their intention was clear — to consume or sell the product..

While the oil scoopers were busy at work, the owners of the product also made frantic efforts to salvage something by hiring a few big drums to secure some of the spilling oil.

The quantity of the product was not immediately known, but some observers believe the value runs into thousands of Ghana cedis.

The accident was reported to have occurred around 3:30 a.m. Monday when the 16-wheeler tanker, with registration number AS 6861 T, skidded off the road around the Tuba Junction and crashed into a gutter in the median of the highway, falling on its left side and spilling its content.

The tanker was said to be travelling from Abidjan, Cote d’Ivoire, to Tema to discharge the product to a manufacturing company for the production of edible oil.

The driver, known simply as John, who the police suspected to be dosing at the time of the accident, sustained minor injuries and had been sent to hospital at the time the Graphic team got to the accident scene.

His mate, however, escaped unhurt.
The spilling of the oil on the road caused it to be very slippery and even after personnel of the Ghana National Fire Service (GNFS) had gone to wash the oil off, the road still remained slippery enough to warrant safety concerns on such a high-speed highway.

The accident caused long vehicular traffic at both ends of the Mallam-Kasoa Highway, particularly as efforts were made to pull the disabled tanker from the gutter.

Police personnel from the Toll Booth Police Station had to work around the clock to direct and manage the traffic situation.

He also advised drivers to be cautious and respect speed limits when driving through residential communities.

ASP Afari urged pedestrians to always use the appropriate points, such as Zebra crossings, to cross roads in order to avoid knock-downs by vehicles.