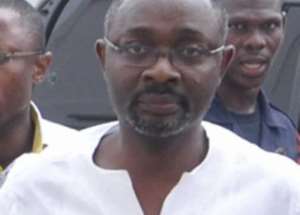 “By justice, a king gives stability to the land …If a ruler listens to falsehood, all his officials will be wicked (Prov. 29: 4 &12)

There is no doubt that President Mills' integrity is unquestionable. His merciful and meek disposition marks him out as leader with rare leadership qualities that his most vitriolic critics won't deny.

Thanks to the law of homogeneity, that “birds of the same feathers, flock together,” he has assembled around him people who have similar leadership traits.

But, not all the men around him have these traits. Some of them, with dark and evil minds, have become the cancer that is slowly destroying the unity of the party.

Of course, one cannot expect President Mills to score 100% in the choice of the people surrounding him. Not even Jesus Christ was able to score 100% with the people he selected to be his Apostles. That is why in the end, one betrayed him, another denied him and a third doubted him.

Jesus did not deceive himself that his own men, the twelve Apostles, cannot let him down. We pray President Mills has this heavenly wisdom

Anybody with average mind who has followed the Woyome brouhaha since it broke out and who has read the EOCO report without a prejudice mind will come to the conclusion that dark and sinister minds with power and influence in the Mills government are behind attempts to ensure that Woyome is humiliated and jailed to satisfy their empty and vain egos.

Those people, who are all above sixty years, no longer care whether the NDC will go to opposition or not. One of them recently told a pro-NDC journalist that if the NDC goes to opposition, he loses nothing; it is the young ones in the party who will suffer. How sad!

President Mills has a lot to think of as President of Ghana but we humbly ask him to think about the following;

(i) Why was Woyome's bank cheque leaflets photocopied and shared to members of the NDC communication group recently?

(ii) Per a court ruling following a petition by EOCO, an Accra High Court (Financial Division) with Justice Bright Mensah presiding granted EOCO the permission to freeze Woyome's Account no 1161000009158 with ADB. EOCO did not freeze only that account but without a court order, froze all Mr. Woyome's account including that with Rural Banks.Why?

(3) Your Excellency, has the law be followed in this case? Is justice being served?

(4) Obviously, to ensure that Woyome cannot fight back, the dark hands want to weaken him financially. Is that not so?

(5) So, since all of Woyome's accounts have been frozen, how is he, his children and his wife to survive?

(8) The EOCO report claims that Mr. Paul Asimenu told them he deceived the AG with his opinion to her about the capacity of Mr. Woyome to demand payment for job done in the CAN 2008 matter. Mr. Asimenu claims and has told the police he never made such statement. Why is it in the EOCO report?

(9) When Alfred Woyome appeared before EOCO, in answer to a question, he said he has a police officer guarding his house as a member of government. The next day, Kwesi Pratt was on air talking about Alfred Woyome having a police guard. What is the relationship between EOCO and Kwesi Pratt? CJA?

(11)Mrs. Effie Simpson-Ekuban was the Member/Secretary to the Central Tender Review Board (CTRB) which evaluated all the bids and held that Waterville's bid was the best. She was also the Ag. Chief Director at the Ministry of Finance when the judgment debt was being paid to Mr. Woyome. It was her failure to furnish the Chief State Attorney, Mr. Nerquaye-Tetteh that made it possible for Mr. Woyome to secure a default judgment. How come EOCO did not mention her in their report?

(12) Even though there is evidence that the Chief State Attorney was ready to go defend government in the case, the inability of Mrs. Simpson-Ekuban to furnish him with documents he asked for made it impossible for him to do so. EOCO, in its report stated that the Chief State Attorney, Nerquaye-Tetteh, deliberately failed to go defend government. Why this lie?

(13) Why is it that NDC leading lights who are friends of Mr. Woyome are suddenly shying away from him, fearing that they will be sacked if they do so. Who will sack them? Not His Excellency, certainly?

(ii) Who then are the NDC members afraid of? The answer is obvious.

(12) Since it is a fact that a person is “innocent until proven guilty,” why are some people in the NDC anxious to isolate Woyome from the NDC?

Your Excellency, two things convinced the Daily Post before December 2008 that you and the NDC will win the election. The first is the illegal jailing of Mr. Tsatsu Tsikata. The second is a High Court decision against Mr. Kwame Poku, a busineeman in Tema in a case brought before him by his business partner, a son of the then President Kufuor.

In both cases, the Executive clearly interfered with the cause of justice. That is one thing God cannot stand, especially when the cry of the innocent victim comes to Him. For this paper, it was the Kufuor government's use of the judiciary to settle personal scores that spiritually led to its downfall.

Don't fall into the same trap, Your Excellency. If the dark hands adulterate the cause of justice and Mr. Alfred Woyome is illegally jailed as they want him, his cry will go before God. The consequences are will be dire.

In thirty years time, no one will know who the Vice-President of Ghana, or the various Ministers, Chairmen of the Boards of Directors, Security heads or MCEs were between 2008 and 2016 when you ruled. But everyone shall remember you as the President. The acts of omission or commission by your men will be part of your legacy. The action of those who want Woyome jailed at all cost will be part of your legacy.

But let him not be found guilty because of the machinations of his enemies who want to show him where power lies. The ball is in your court, your Excellency.