Nigerians too poor to sue over corporate abuse: jurists 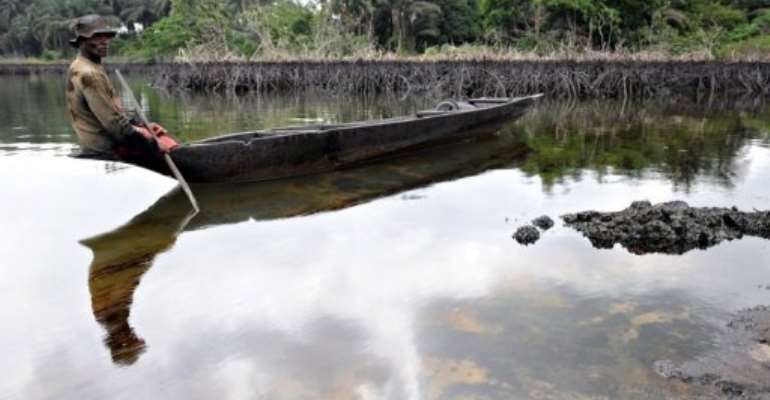 A fisherman looks at spilled crude oil floating in the waters of the Niger Delta swamps of Bodo, in 2010. By Pius Utomi Ekpei (AFP/File)

GENEVA (AFP) - Victims of environmental disasters or other abuses inflicted by corporations in Nigeria are being denied justice as they are too poor or do not know how to seek legal recourse, jurists said Wednesday.

Even though a legal aid scheme exists, it "suffers from chronic underfunding."

"As a result, it fails to help those most in need to access judicial remedies," added Lopez.

The problem is illustrated by the small numbers of litigations against corporations, despite several instances of serious pollution generated over the decades of oil or mineral extraction.

Of the few that make it to court, even fewer manage to obtain rulings in favour of victims, noted the report.

In October, a Nigerian tribal king filed a lawsuit in a US court on behalf of his people against oil giant Shell, seeking $1 billion in compensation for extensive pollution that sickened the population and damaged their lands.

The plaintiffs said they decided to file the suit in a US court because of Shell's history of a "culture of impunity" and "disregard" for the Nigerian judicial process.

They note that the Shell has refused to comply with a 2005 order to end gas flaring in the Iwherekan community or to pay a 2006 judgment to pay $1.5 billion to the Ijaw Aborigines for damages caused by decades of pollution.

The UN environment agency had said that decades of extensive oil pollution in the Ogoniland region -- which lies in the Niger Delta -- may require the world's biggest ever clean-up.

Oil giant Shell had accepted responsibility for the spills, but disputes the magnitude of the pollution estimated by activists to have reached hundreds of thousands of barrels.