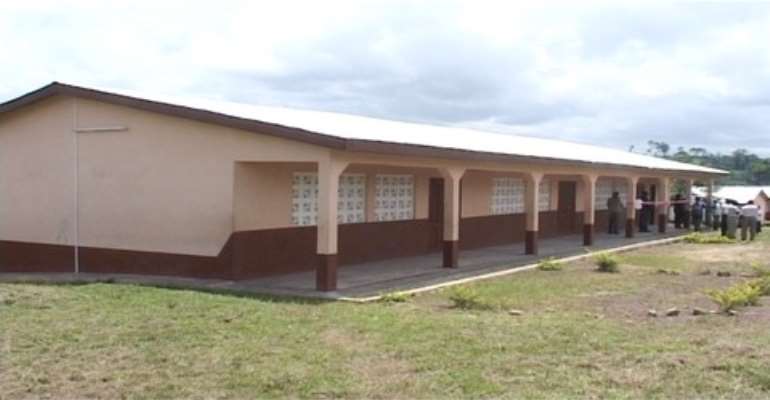 The St Thomas Aquinas SHS is a Catholic Day Senior High School established in Accra by the catholic missionaries on February, 28, 1952; in the present premises of St. Peter's Catholic Church, Osu.

Patron Saint: The school was named after Saint Thomas Aquinas, notable, pre-eminent spokesperson of the catholic tradition of reason and divine revelation who lived from 1225 to 1274. He was one of the greatest teachers of the medieval Catholic Church, honoured with titles of doctor of the Church and Angelic Doctor.

In the year 1239, he was sent to Naples where he became indoctrinated to the Aristotelian philosophy. He studied with Albert the Great in Paris and Cologne, held two professorships, lived at the Court of Pope Alban IV, directed Dominican schools and combated adversaries of mendicants, among others.

Indeed, his greatest contribution to the Catholic Church is his writings which were characterised by unity, harmony and continuity of faith and reason, and of revealed and natural human knowledge.

A man of the gospel, he was an ardent defender of revealed truth, and saw the whole natural order as coming from God the Creator.

Located on Cantonment Street opposite the European Union Offices and the Civil Service Training School, lying between the Cantonment Police Station to its south and the Embassy of Togo near the Cantonments Circle, within the prime area of the commercial and administrative hub of Osu, is St. Thomas Aquinas Senior High School where the students wear white shirt with the School crest christened “Veritas Liberat”, meaning "only the truth can make you free”, on the chest, tucked into a brown Khaki pair of shorts to match.

In contemporary times, however, a light blue shirt and the school cloth which is textile embossed abundantly with the school crest have fashionably supplemented the traditional white shirt which was the choice of the founding fathers. It is needless reminding the Ghanaian intellectual that the European Christian missionaries who arrived on the shores of the Gold Coast in the early twentieth century had a dual aim of opening up the country through proselytisation and education.

The Roman Catholic missionaries stood solidly in the forefront establishing schools across the length and breadth of the country to educate boys in the catholic tradition. It was in this direction that the Catholic Bishop of Accra, the Most Rev. A. A. Noser, started the St. Thomas Aquinas School in a two-story house at Osu-Anohor close to the littoral with a limited number of fifty students. The original staff comprised three S. V. D. Reverend Fathers, notably Father Alphonse Elsbernd (the first Headmaster), Father Wilson and Father Fisher with two lay teachers.

In March 1954, Father Clement Hostse became Headmaster with 130 students and staff strength of eight. The school was recognised as Government assisted by the West African Examinations Council (WAEC) to present candidates for the Ordinary Level Examination in 1956 when Rev. Father John McKillip became Headmaster. The first batch of students wrote the West African School Certificate Examination in 1957 with flying colours.

The Headmaster of the school in 1958, Rev. Father Maurice Lesage, a botanist whose love for reptiles led him to keeping snakes on the compound and ultimately wrote a book entitled "Snakes of West Africa", proved very indefatigable in his endeavours to grow the school to maturity and fame.

Assisted by colleague catholic priests, notably, Rev. Fathers Joseph Schorupka (popularly called Father Joe), Burnes and Brother Kostkhar, the school grew in popularity as student population soared creating inconveniences concentrating on classroom accommodation. As a new and more suitable site was being contemplated, in September 1961, the chiefs of La released a parcel of about 10 hectares of land at Cantonment to serve that purpose.

The founding fathers quickly procured the necessary resources coupled with the approval of the Ministry of Education to put up classrooms and laboratories for the school. In September 1963, the school relocated to its permanent site on Cantonment Street, in Accra.

The new location provides a serene atmosphere conducive for the attainment of genuine academic and moral discipline which are cornerstones of the school.

Appreciating the difficulties of Aquinas students securing places in Sixth Form in other schools, the then Headmaster, Rev. Father John McKillip, applied for the institution of the Sixth Form to enable students to take the Advanced Level Certificate course and said smoothly to the tertiary institutions. This materialised as the Ministry of Education gave the approval and establishment in 1971.

The teaching staff capacity was strengthened by the American Peace Corps and United Kingdom t Overseas Volunteer Corps who were specialists in Science, Mathematics and English Literature. St. Thomas Aquinas School attracted children of European and Asian residents of Accra. Among the Asian students are currently surviving name like the Ashkhars and others.

By the year 2002 when St. Thomas Aquinas School celebrated its golden jubilee, academic programmes had expanded to include Business, Agriculture and Visual Arts.

Staff bungalows began to spring up with the Headmaster's accommodation, one-storey block for staff, a hostel and canteen for the students.

Achievements: the founding fathers' motives of bringing up students in a brilliant academic manner coupled with sound moral background, yielded fruitful results as sizable numbers of Old Toms made their ways into the Seminaries for training and induction into the Priesthood over the years.

Truly, the school has produced two Catholic Bishops and an Anglican Bishop- Elect for the Clergy of the Republic of Ghana. They are the Most Rev. Vincent Sowah Boi-Nai (1966 year group) and Most Rev. Gabriel Edoe Kumordji, (1976) Bishops of the Dioceses of Yendi in the Northern Region and the Prefecture of Donkorkrom in the Afram Plains respectively. The Anglican Bishop-Elect of the Accra Dioceses of the Anglican Church is the Rt. Rev. D. S. M. Torto (1978 year group).

In addition, there are currently about 16 Old Tom priests who are parish priests in various catholic dioceses across the nation. We recollect Rev. Fathers Quaye Foli, Andrew Addo Obeng and Benjamin Opoku Ohene (1989 year group), the current Assistant Headmaster (Academic) of the school. The legacy of writing bequeathed by the Patron Saint Thomas Aquinas has dawned on them as most of them have authored religious books on the Catholic doctrine.

The annals of Old Tom priests would be incomplete without the mention of Monsignor Alex Bobby Benson (1972 year group) of Koforidua Diocese, who on 3rd January this year, as an integrate part of his birthday celebration at the St. Thomas Aquinas School Cantonments, Accra, launched Matthew 25 House, an HIV I AIDS Project in Ghana as well as a fund-raising for the construction of a Hospice facility to be dedicated to the care of people with terminal illness.

Old Toms have made significant impacts with their performance at both national and international levels.

Sixtieth Anniversary Celebration: the 60 years commemoration of catholic moral and academic education was out-doored under the theme "Sixty Years of Holistic Catholic Education Towards National Devel-opment: The Day School Experience", on March 7, 2011 at the St. Thomas Aquinas School Chapel with an array of activities to be accomplished. The Guest Speaker, Professor George Hagan, who was very philosophical in his address, called on Old Toms to put into practice the values of what was inculcated in them as they journeyed on the academic ladder of education. He charged them to lead morally upright lives, eschew corruption, indulgence in any forms of vices which go not only to tarnish but detract their good image in society. A special Remembrance Day Thanksgiving Service was held for the repose of the souls of deceased Old Toms over the decades.

An anniversary festival of Nine Lessons and Carols was held on December 21, 2011. The St. Thomas Aquinas Day (Founder's Day) came on Saturday, 28th January and afforded the opportunity for interaction with sections of student invitees drawn from sister Catholic Schools in Accra. The School Choir, under the choirmastership of Mr. Jojo Anderson, had a tight itinerary visiting Parishes in Accra attending masses entertaining the congregations with their sweet melodious songs. They were highly applauded at the Christ the King, Cantonments, St Mary Margaret, Dansoman, Star of the Sea and St. Kizito, Nima, Parishes of the Archdiocese of Accra.

Professor John Owusu Gyapong, a Pro Vice Chancellor of the University of Ghana, Legon, has notified acceptance to chair his alma mater's 60th anniversary grand commemorative durbar and speech and prize -giving day which climax the celebrations on Saturday, February 25, 2012 on the school compound.