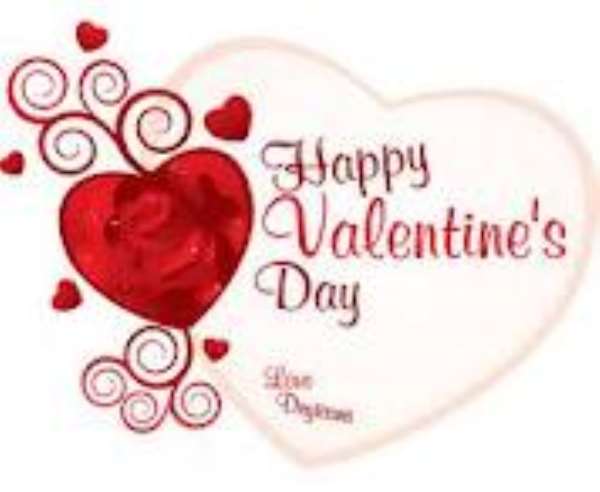 Accra, Feb, 14, GNA – Valentine's Day, which fell on Tuesday, February 14 is reputed to be the second most popular card-sending period after Christmas globally.

On the day candy, flowers and other gifts are exchanged between loved ones, all in the name of St. Valentine.

The practice has now gained roots in Ghana, especially with the youth who have twisted the event to suit their individual needs and wishes.

The history of Valentine's Day and the story of its patron saint are shrouded in mystery. February has long been celebrated as a month of romance, and that St Valentine's Day, as we know it today, contains relics of both Christian and ancient Roman tradition.

The Catholic Church recognises at least three different saints named Valentine or Valentinus, all of whom were martyred. One legend contends that Valentine was a priest who served during the third century in Rome.

When Emperor Claudius II decided that single men made better soldiers than those with wives and families, he outlawed marriage for young men.

Valentine, realising the injustice of the decree, defied Claudius and continued to perform marriages for young lovers in secret. When Valentine's actions were discovered, Claudius ordered that he be put to death.

Celebrated in the middle of February, or February 15, Lupercalia was a fertility festival dedicated to Faunus, the Roman god of agriculture, as well as to the Roman founders Romulus and Remus.

Ghana's Valentine's Day Celebration is very popular among the youth, with the majority of them believing that the day is associated with promiscuity and would prefer celebrating the event with their partners in night clubs, drinking spots, hotels and other public places.

To give a new image to the event, Government in 2006 introduced the National Chocolate Day to create the awareness of the quality of Ghana Chocolate.

An official release published on the Ghana government portal by the Ghana Tourism Authority (GTA) said this year's event is on the theme: “Showing Love to the Vulnerable.”

As part of the celebration, chocolate and other cocoa-based products presentations would be made to vulnerable groups such as orphanages, mental health institutions and special schools throughout the country by the regional heads of the GTA.

Some selected entertainment centres throughout the country would also organise musical jams where cocoa based products would be given to patrons as prizes.