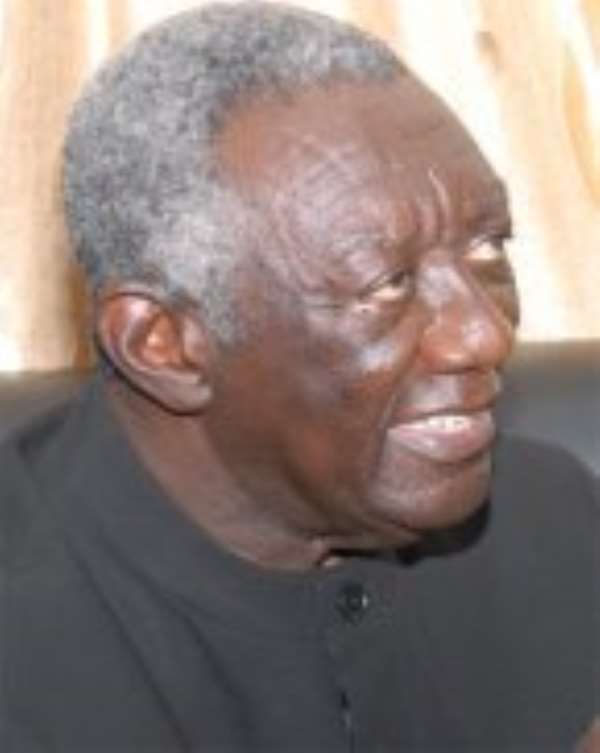 Former President John Agyekum Kufuor has endorsed a decision by some functionaries of his government not to appear before the Economic and Organised Crime Office (EOCO) which is investigating the payment of judgement debt to Mr Alfred Agbesi Woyome, a businessman.

“The Attorney-General’s Office itself is suspect; EOCO reports to that office. So if you want me to answer openly and sincerely, that’s not the place to take me,” he pointed out.

Commenting on the payment of GH¢58 million as judgement debt to Mr Alfred Woyome during an interaction with journalists in Accra Thursday, President Kufuor upheld the contention of the former ministers invited by EOCO that once the matter was before the Public Accounts Committee of Parliament, “let’s go there and state our case publicly”.

Otherwise, he said, a committee could be set up to sit in public to investigate the matter, so that anybody with evidence, including the former ministers, could avail himself or herself of the platform.

The former President said his administration never awarded any contract to Mr Woyome, for which breach he should be paid compensation.

He said his mandate as President was to serve the nation, noting that as a leader, it was his responsibility to protect national property.

“Naturally, it’s very disturbing, it’s very frightening. It’s like our systems are not working,” he noted, adding that for such an amount to be paid out of the Consolidated Fund by the Controller and Accountant-General, who is under the Minister of Finance, everyone in the chain of authority right up to the President should have been alerted.

He expressed surprise at the fact that even as the government claimed that the national treasury was empty at the time it took office, it had been able to pay more than GH¢600 million as judgement debt within the past three years.

“One should ask: How could a nation that was broke pay that amount? Where did that money come from? And if that money was paid through this chain of authority, how come everybody seems not to know how it was paid?” he wondered.

On the issue of cocaine-turn-sodium bicarbonate, former President Kufuor said the recent cocaine swap saga was an indication that there was a systemic problem with the security services that had to be addressed, instead of politicising the issue.

He said the cocaine scandal clearly indicated that no particular government should be painted with a cocaine brush because the problem was not peculiar to any government.

“So when we are seeking a solution, we should not limit it to a party or a government. It is the basic system of security that we should really put the searchlight on,” he said during an interaction with journalists in Accra Thursday.

Mr Kufuor described the turning of cocaine into sodium bicarbonate as very mysterious and disturbing to the nation, adding that until the culprits were arrested, “we should not sleep”.

He said if cocaine could magically turn into sodium bicarbonate in the custody of the security services, it meant the country’s security system was riddled with holes and so “we should all be seriously concerned”.