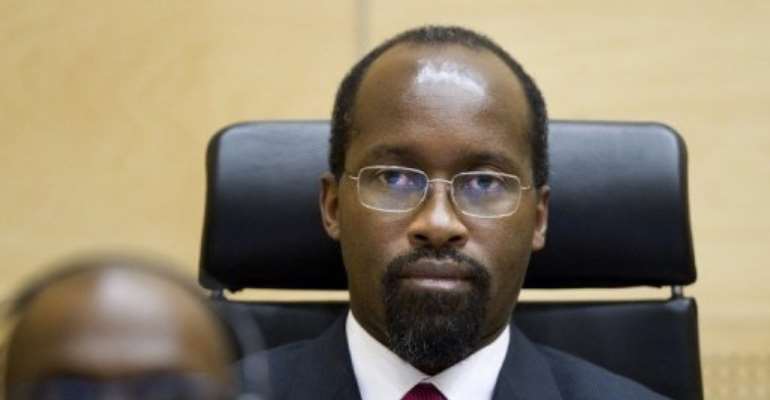 Callixte Mbarushimana makes his initial appearance before the International Criminal Court in The Hague in January. By Jerry Lampen (AFP/POOL/File)

THE HAGUE (AFP) - The chief prosecutor at the international war crimes court on Monday appealed its decision to drop charges against Rwandan rebel leader Callixte Mbarushimana and order his release.

Mbarushimana has spent nearly a year in detention at The Hague on charges of war crimes and crimes against humanity allegedly committed by his rebel forces in the Democratic Republic of Congo in 2009.

Two of three judges of the court's pre-trial chamber on Friday ordered those charges to be dropped due to insufficient evidence -- a decision that chief prosecutor Luis Moreno-Ocampo appealed Monday.

"The prosecution hereby appeals the decision on the confirmation of charges and the resulting order to release Callixte Mbarushimana," he said in a document filed before the court's appeals chamber.

Moreno-Ocampo also asked the International Criminal Court to "immediately suspend the release of the suspect" until the appeals chamber makes a ruling.

The prosecutor had asked the court Friday to suspend the decision to release Mbarushimana, identified as executive secretary of the Democratic Forces of the Liberation of Rwanda (FDLR), but his request was turned down.

The charges include allegations that FDLR members forced civilian men to rape women, mutilated the genitals of rape victims, cut open the wombs of women and removed their foetuses, and burnt down homes.

Moreno-Ocampo warned Friday that releasing Mbarushimana could see him interfere with the prosecution's investigation and could "effectively render any reversal of the decision by the appeals chamber futile due to the court's inability to secure his re-arrest".

Mbarushimana was arrested in Paris in October last year and was transferred to The Hague in January.

Prosecutors accused him of organising a campaign of attacks against Congolese civilians from Paris using "international and local media channels".

The attacks perpetrated by the FDLR resulted in 384 civilian deaths between February and October 2009, as well as 135 cases of sexual violence, 521 abductions, 38 cases of torture and five of mutilation, prosecutors said.

Mbarushimana himself has always insisted he was innocent and denounced the "barbarity" of military forces that ravaged Africa's Great Lakes region.

It is only the second time that the court has declined to charge a suspect before it. The first case involved Sudanese rebel leader Abu Garda in February 2010.

The court, founded in 2002, is the first permanent international criminal tribunal to prosecute perpetrators of genocide, crimes against humanity and war crimes.