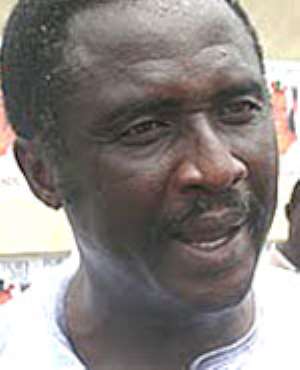 One of the fearless critics of President John Evan Atta Mills and also the Member of Parliament (MP) for Lower Manya Krobo in the Eastern Region, Mr. Michael Teye Nyaunu, has a mountain to climb if he is to enter Parliament again in 2013.

Six members of the National Democratic Congress (NDC) have declared their intention to contest the man, who became vocal during the 'FONKAR GAMES', in the parliamentary primary, which is scheduled for January next year.

Whilst a section of the constituents are rooting for the Deputy Eastern Regional Minister, others  are of the conviction that the DCE had done enough for the area, and that when given the chance to become MP, he would solve the under-development problem of the area.

In an interview with the paper to find out why hewa in the race, Agbo Tetteh said he was responding to the call by the youth to take up the mantle of representing them in Parliament, because they had lost confidence in the incumbent, who had failed to bring the needed development to the people.

'My sense of commitment to development and other social interventions that have been executed in the district so far, to transform the fortunes of the people, make me the best DCE,' he said.

According to him, the party stands to maximise its votes in the area.

The DCE claimed that if he is voted for in the primary, he would lead the party to maximise votes during the 2012 elections.

'I have paid my quota in serving the area through committed and dedicated service to the cause of the NDC. I am calling on the delegates to offer me the opportunity to lead them, because I have what it takes to change the socio-economic face of the area,' he declared.

The Deputy Regional Minister was also of the conviction that the sense of belongingness and urgency he attaches to development would be the magic tool to win the primary.

He made the declaration when he picked his nomination forms on Monday.