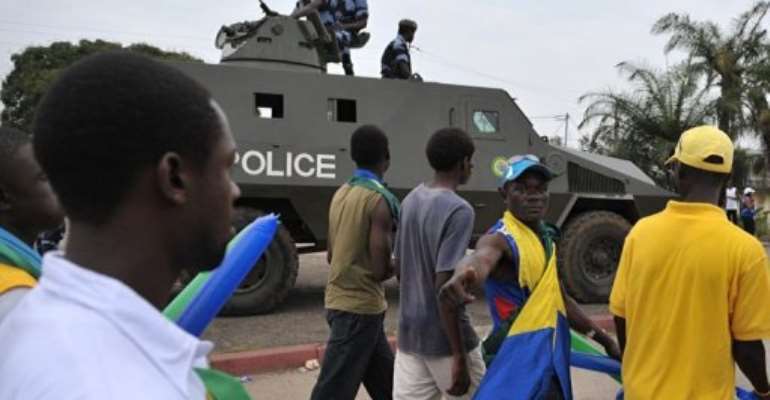 Gabon football team supporters are pictured in Libreville in 2009. By Issouf Sanogo (AFP/File)

JOHANNESBURG (AFP) - Surprise qualifiers Gabon and Senegal meet Tuesday in a CAF under-23 football championship semi-final with a place at the 2012 London Olympics up for grabs.

After losing to Egypt and snatching a lucky late draw against South Africa, Gabon overcame the early second-half red carding of striker Allen Nono to stun Ivory Coast 3-1 and advance as Group B runners-up.

Gabon had crouched below the media radar during the build-up to the inaugural tournament, had no 'big-name' players and Albert Claude Mbourounot was the only unknown coach among the eight at the championship in Morocco.

After trailing the Ivorians at half-time in Tangiers, the Central African Panthers bared their claws to turn the game on its head through early second half goals from Emmanuel Mba Ndong and Henri Ndong.

Lionel Yacouya added a late third goal to give Gabonese football a timely boost as the country co-hosts the 2012 Africa Cup of Nations next January and February with Equatorial Guinea.

It was an amazing turnaround for Gabon who had shown admirable fighting spirt and defended in depth during the first two matchdays, but displayed little appetite for attack.

Senegal were unimpressive qualifiers for the two-week tournament -- scoring just twice in four outings -- and a matchday-one defeat by Algeria strengthened the belief among pundits that the West Africans would be early casualties.

But Kara Mbodj and Abdoulaye Sane punished blunders by Nigeria goalkeeper Dele Ajiboye to score the goals that delivered a shock 2-1 victory and then proved this was no fluke by overcoming hosts Morocco three days later.

Both sides boast many physically well endowed footballers who quickly retreat behind the ball when opponents have it and while the Senegalese are bound to be favourites, Gabon must believe they can mock the form book again.

The action moves south from Mediterranean city Tangiers to Marrakech Wednesday as Morocco and Egypt square up in a North African showdown with another ticket to London on the line.

All will not be lost for the semi-finals losers as they clash Saturday for third place and a third Olympics berth and the fourth-place country gets yet another chance to make London against an Asian country in a play-off next April.