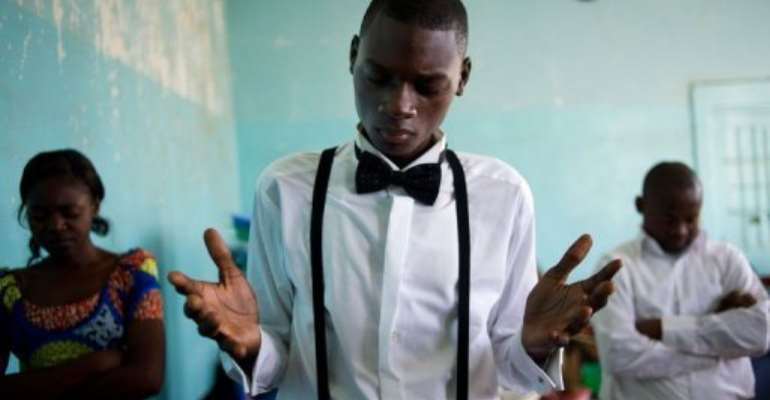 Congolese church-assistants pray before a service at the Jerusalem Parish United Methodist church in Lubumbashi. By Phil Moore (AFP)

KINSHASA (AFP) - Catholic bishops in the Democratic Republic of Congo issued a dire warning Sunday about the country's political situation after veiled opposition threats of violence over early election results.

The giant central African state is enduring a tense wait before the election commission announces the winner of the presidential race Tuesday, a result the supreme court must review and confirm by December 17.

The precarious situation triggered a warning from the troubled country's influential bishops on Sunday.

"The image we've given is that of a high-speed train going straight toward a wall," Bishop Nicolas Djombo, president of the National Episcopal Conference of the Congo, told a press conference in Kinshasa.

"We call on all political actors, on all leaders to brake the train, which risks going straight into the wall," he said, echoing appeals for peace from the UN Security Council, the EU, the US and international election monitors.

"It's important to us to exhort the Congolese people to remember how much our country has regressed because of the lack of restraint that, in the past, has brought about violence, pillaging and the destruction of infrastructure whose consequences we suffer to this day."

Monday's vote, just the second since back-to-back wars that gripped the country from 1996 to 2003, was marred by deadly rebel attacks and rioting, and the long wait for results has been filled with tensions.

The results showed Kabila leading by 51 percent to 34 percent with a third of polling centres counted.

"I'm warning Mr Ngoy Mulunda that the UDPS not only rejects these results, but warns Mr Ngoy Mulunda and Mr Kabila to respect the will of the Congolese people in publishing the results that will follow," Tshisekedi said.

"I'm going to say that, if they don't, they risk committing suicidal acts. I call all our people to stay vigilant so that if needed they can execute the orders I will give them."

The CENI was originally not expected to release any results until Tuesday, but said Friday it had decided to release early returns to stanch a flood of rumours and false reports about the count.

The commission is scheduled to give a new update Sunday evening.

"The government deplores the alarming and very partisan character of this report," he said, accusing the New York-based rights group of publishing "unverified allegations".

"The national justice system is and will remain impersonal and impartial to find out the infractions committed by both partisans of the ruling coalition and the opposition during the entire electoral period," he added.

His statement came after the government said Saturday it had ordered a military inquiry into the report and instructed the rights group to cooperate, a move HRW welcomed.

"Human Rights Watch will cooperate as much as possible in an impartial legal inquiry, as the organisation has done in the past," it said Sunday.