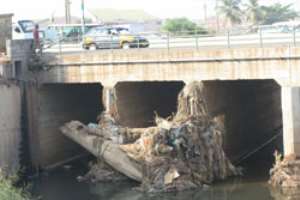 Residents of Carprice, suburb of Accra, are  calling on the Accra Metropolitan Assembly (AMA) to immediately remove a tree trunk which is stuck in the main drain, three weeks after the recent heavy downpour of rain, as it might cause massive flooding, since it is collecting rubbish.

The tree trunk, according to the residents, was carried from somewhere by the October 26th rains, which inundated some parts of Accra and its environs.

Mr. Akwasi Mantse, a resident of the area, told the Accra File that he had reported the case to the Assembly Member of the area, but nothing had since been done to help to save the situation from future floods.

He added that the drain often overflows it banks into people's homes anytime it rains, so the presence of a tree trunk this size would cause massive flooding in the event of heavy rain.

He said, 'I don't know why the Assembly Member is so reluctant to draw the assembly's attention to removing the tree trunk.'

He said the Assembly Member advised to seek assistance from the National Disaster Management Organisation (NADMO) Metro Director of Ayeedikim who also paid no attention to the call.

Akwasi stated that most homes in the community do not have toilet facilities, while some had pan-latrines which had been abolished the AMA, because it was unhygienic and a health threat to residents and the environment.

He said what worried him most was that people with pan-latrines pour faeces and refuse into the drain, as well as the on the tree trunk, which creates a terrible stench in the area.

'You wouldn't believe it how house flies paddle around us while eating. I will not be surprised if there is a chorea outbreak here,' he warned.

The File made efforts to contact the Assembly Member for the area, who gave the assurance that plans were far advanced to remove the tree trunk as soon as possible.

The File also calls on the AMA to provide public toilet facilities, as well as ensure that every home in the area has adequate places of convenience to discourage open defecation.

This is because the area is centrally located, and hosts one of the most important ceremonial roads that link the capital to the eastern corridors and other parts of the country.

The Ghana Highway Authority (GHA), Accra Metropolitan Assembly (AMA) and the Ministry of Communication must check the operations of some telecommunication companies, because after laying cables along the roads and streets in the city, leave the some trenches half covered.

Some of these trenches have accumulated water and rubbish, which aid in the breeding of mosquitoes.

To add to the problem, it also poses threat to children, especially during the nights, since there are no warning signs.

The digging has also deformed the beauty of the pavements and lawns which makes most areas attractive.

The contractors sometime damage pipelines allowing water to run to waste for weeks without any attempts to even to report it to the Ghana Water Company Limited for repair.

Some people interviewed by the File were angry that the city authorities give license to companies to undergo excavation without strict supervision.