Five galamsey operators killed in a mining pit at Mpohor 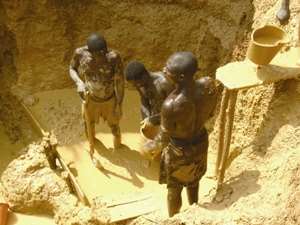 Mpohor (W/R), Nov. 19, GNA - Five illegal small-scale miners were killed on Saturday in Mpohor in the Mpohor Wassa East District of the Western Region when the pit they were working in collapsed on them.

He said the incident occurred at about 1100 hours when the deceased were operating in one of the pits ceded to them by the Golden Star Resources Limited, a mining firm in the Mpohor area.

DSP Yakubu said the mining company ceded some parts of its concession to the “galamsey operators” to avoid encroachment on the rest of the concession.

The corpses had been deposited at the Effia-Nkwanta Regional Hospital pending autopsy.

DSP Yakubu said four other miners escaped death narrowly, but were severely injured and receiving treatment at the same hospital.