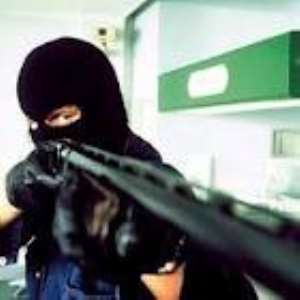 Boako (W/R), Nov.15, GNA -- Armed robbers, on Tuesday dawn allegedly attacked traders and passengers on board a 33-seater bus on the Boako-Sankore road in the Sefwi-Wiawso Municipality, robbing them of their money, mobile phones and other personal belonging.

The Sefwi-Wiawso Divisional Police Commander, Deputy Superintendent of Police (DSP) Raymond Kofi Erzuah, who confirmed the story to the GNA, said even though the police had heard of the incident, victims did not report the case to the security agents.

He said when police were dispatched to the robbery spot, they found two empty cartridges and two locally manufactured guns but no arrest had been made.

DSP Erzuah said: “My men combed the entire area and nearby forest but they could not find any body at the place. I appeal to the victims of the robbery to come out boldly and report details of the case to assist our investigations”.

He said if the victims refuse to report the alleged robbery to the police, the case would be treated as rumours since the police needed witnesses to assist in investigations.

DSP Erzuah said: ''It would be very difficult on our part to trace the suspects if victims kept the brutalities and trauma to themselves because we were not present at the robbery.