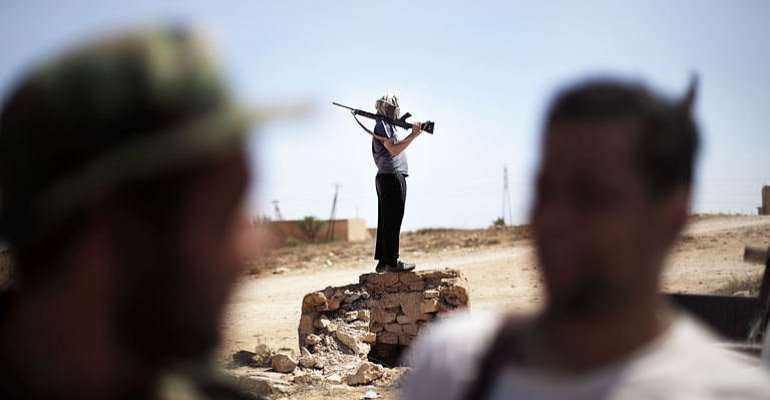 Libyan rebels gather at the front line on the eastern ridge of the Nafusah Mountains. By Marco Longari (AFP)

BENGHAZI, Libya (AFP) - Libya's rebel council issued a blunt warning to neighbouring Algeria on Sunday, insisting that it must "stop supporting Kadhafi," as tensions between the North African countries bubbled to the surface.

Abdel Hafiz Ghoga, vice president of Libya's National Transitional Council, accused Algeria of supporting Moamer Kadhafi militarily in the early days of the near five-month-long war, and that it continued to support him politically.

"Our only response to Algeria is: stop supporting Kadhafi and stop helping him terrorise and kill innocent civilians and our loved ones," he said.

Algeria has not officially recognised the rebel council, nor has it called for Kadhafi to go.

"(Kadhafi) had military air support from Algeria" said Ghoga, recalling the early days of the war, adding that 4x4 vehicles had also crossed the border in support of Kadhafi forces."

"We hoped that the Algerian regime had learned its lesson and stopped these acts," he said, without giving details about current levels of support.

The two countries share a massive and porous border in the Sahara, and tensions appear to have heightened because Algiers backed an African Union peace plan that would leave Kadhafi in power.

Although Algeria has complied with UN resolutions by freezing any assets held in Algeria by him, his relatives and cronies, it has backed directives from the African Union and Arab League which have both withheld recognition of the rebels.

Ghoga said the council had no problems with the Algerian people, and hoped for more positive relations in future.

"We don't have a problem with the Algerian people, and our relationship with our Algerian brothers will be good and solid after Kadhafi steps down," he said.