A Slice Of Brazil In Accra 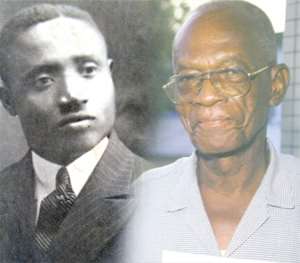 The waves of the great Atlantic Ocean continuously slap a portion of the banks of the great ocean spanning the Ussher Fort and beyond in Accra. The age-old forward and recessive motion of the waves was witnessed by the mostly Hausa and Yoruba slaves shipped to the Americas, especially Brazil, to provide the much needed labour for new industries springing up in the colonial period. They were pawns in the interesting and disturbing history of the Trans-Atlantic Slave Trade which we read and appreciate today.

Their descendants, who were assimilated into ethnic groups living along the coast of West Africa, upon the return of their forebears, still remember the oral tradition imparted to them even as the Portuguese language they spoke upon arrival has been replaced with Ga.

With Brazil taking in about 40% of slaves from West Africa at the peak of the slave trade (about 6 million), the historical links between the sub-region and the South American country are not surprising.

There is no denying the fact that the contribution of this labour force to the development of Brazil was enormous. According to the IMF, by 2015, Brazil will be the fifth largest economy in the world.

Brazil House
A refurbished house, Brazil House, built through funds provided by the Brazilian government, stands prominently facing the Atlantic Ocean. It is the most well-known reminder of the relationship between Brazil and Ghana, and indeed other coastal areas from Lagos through to Cotonou, Lome and Accra.

The Gas could be described as the most hospitable ethnic group in Ghana, given their readiness to offer land to total strangers, a trait which led to their offer of a plot for the black returnees from Brazil.

It was this inherent spirit of hospitability which drove the Gas to welcome with open hands, the freed slaves who, out of their own volition, transported themselves from faraway Brazil to the land of their ancestors.

The people of Otublohum from the Ga stock were exceptionally generous to the strangers who landed on their portion of the coast. The Taboms were assisted by the Otublohum, despite the initial resistance of the Dutch Commissioner Christian Enrst Lars, the man in charge of the Otublohum area of Accra, which was then divided into Dutch and British sections.

Brazil House is situated on a land offered to Mamman Nasau or Nasir, one of the first arrivals from Brazil.  The house is dedicated to his memory via a cement-work memorial pasted on the frontispiece of the imposing building.

The Tabon Mantse flanked by family members
Tabon Mantse
Many families make up the Tabon group and their relationship to the Yoruba and Hausa ethnic group is not in doubt. Some of the families have adopted names of their Muslim forebears in an effort to preserve links with their heritage.

The god of Fire, known as Sango, whose image today is used as the logo of the Nigerian Electric Power Authority (NEPA), is still prominent among the Tabons, along with other Yoruba words used in the cultural rituals in the Tabon Mantse Palace. These words have been passed on from generation to generation over the past 170 years since the arrival of the slaves.

The present Tabon Mantse, or Chief of the Tabons, spoke to Daily Guide about the history of his people.

'Our forebears were mostly Muslims. Some of them came from Mali and surrounding countries. Most of them worked in Bahia, Brazil. Our great grandfathers who were born there had Muslim names as evidenced from the names of the first seven leaders who arrived here. These names were passed on to us.  So as I'm sitting down right now, I'm called Abdulahi, but I am Christian.'

He continued, 'Some of our people came with their traditional religion they practiced while in Brazil based around the worship of the god of Fire, Shango, who is still worshipped in some parts of Brazil.'

Genesis
On the genesis of the word Tabom, he stated, 'The word Tabom is traceable to the arrival of our great grandfathers. They spoke only Portuguese and exchanged greetings such as 'Es Ta Bon?' to wit 'is all well?' Since then, he explained, the Gas 'began to refer to them as the people who greet with 'tabom', hence the name Taboms to date.'

The Taboms brought to the Gas the well-digging, irrigation, tailoring, shoe-making and masonry and using blocks for structures. The First Scissors House in Accra can boast of being the first tailoring shop in the nation's capital, with the Morton family heading the establishment.

It is also interesting to note that one of the families, the Peregrinos, had a Yoruba father in the person of Chief Brimah I, the man who, upon arrival in Accra, married a certain Fatuma, a first generation descendant of Mamman Nasir or Nassau closely related to the Lutterodts, cousins. The oldest descendant of Mamman Nassir today is a certain William Lutterodt.  Mamman Nasir is said to have arrived in the Gold Coast in 1836 with his cousin Adjuma, which is the altered version of Juma which means Friday in Hausa or Arabic.

Adjuma bore Peregrino. Fatuma's children with the first Head of the Islamic community in the Gold Coast colony, Chief Brimah I, bear the surname Peregrino-Brimah to differentiate themselves from the other children of the Yoruba wives of the chief.  When Mr. Lutterodt turned up for the funeral of the late Chief Amida Peregrino-Brimah who died on 10th January 1998, he was attending the funeral of his cousin.

The Brazilian Embassy sponsored the publication of Letters from Africa which has the picture of Prof Edwin Fiscian, a renowned University of Ghana psychology teacher of some 32 years standing. The Tabom man, now 83, recalled at the time of the interview for the publication that his only connection with Brazil was his grandfather, Nathaniel Kassum Fiscian, who passed away in 1922 aged 82. Kassum or Kassim is an Islamic name.

Fatuma Peregrino
In her fantastic publication, The Brazil House, Mae-ling Lokko presents an insightful Mamman Nassu or Nasiru family tree which has within it Peregrino, Claude, Mrs. Plange, Naa Supiano, Fatuma, Rachia or Rakiya, Alfred Theodore Lutterodt and many others.  The names were chosen at random and not in the order in which they appear in the author's work. Suffice it to suggest however that the names, as they appear above, are descendants of Mamman Nasiru, one of the returnees.

Fatuma Peregrino or Okpedu bore five children for her Yoruba husband who later became the first head of the Islamic community in Accra, Chief Brimah I, an appointment he got from King Tackie Tawiah I.

Fatuma was a wealthy beads trader in Accra whose pedigree contributed towards the stature Chief Brimah I assumed in the colony. She is said to have provided him with assistance to run his business. One of her children, Imoru Mobolaji Peregrino-Brimah, was a rich Accra resident with a lot of property in both Adabraka and Lagostown. He was also a Councilor for Ayawaso in Accra and the first man to import a Lincoln car into the Gold Coast and was a member of Accra's elite class made up of persons like Lawyer Agbado, his cousin, and many others. He later became known as Imoru Lincoln and a leading member of the Accra Turf Club.

The Brazil House
On arrival aboard the British ship SS Salisbury, some of the freed men who thought Lagos was where their ancestors were before they were taken away to Brazil, disembarked while others continued to Accra and other places along the coast. Varied factors informed their decision to settle in these parts. While some of them might have feared the kind of reception that awaited them in the hinterland which they could not locate anyway, others found out that their villages had been wiped out through slave raids. Those who settled in Lagos are called Agudas, descendants of Yorubas and their Accra counterparts, the Taboms, descended from Hausas, Yorubas and other neighbouring countries like Burkina Faso and Mali.

Some of the names attest to the foregone – Mamman Nassau and Mamman Sokoto, Aruna or Adjuma or Juma. Some of the families forming part of the Accra landscape today, who originated from the returnees, are Souzas, Silvas, Vieras and Peregrinos. According to Ayesu and Amos, the wave of return to West Africa took place some 170 years ago, with British ship SS Salisbury playing a key role in the movement. While some academics point at 8th August 1836 as the date of the first arrival of the first group making up of the Nelsons, some put it a little later.  The family which provides the Tabom chief, the Nelsons, was led by Kangidi Asuman. The surname could be a bastardised form of Osuman or Asuman. Many of the returnees migrated from Bahaia, Brazil.

Mamman Sokoto
Another group to arrive was led by Mamman Sokoto, Costa, Ribeiro and then Morton.

Mantse Ankrah has been mentioned as the man who played a prominent role in the reception given the strangers who came with skills like tailoring, shoe making, carpentry and even irrigation. Some of them were offered land away from the coast which saw the development of some areas such as Tudu, which is a Portuguese word for 'it's good', Adabraka and others beyond for the purpose of farming. Some of the mango trees and others they planted still stand to date, reminder to their memories.

Seven of the families which formed new families in the Dutch section of Accra are Vialla, Gomez, Maslieno, Johsah or Josiah, Nelson, Adama, Abu, Manuel, Zuzer, Sokoto, Azumah, Peregrino, Costa, Morton, Aruna, and Fiscian an offshoot of the Arunas. Mr. Lutterodt, father of the Chief Justice Georgina Theodore Woode, a descendant of Mamman Nassau or Nasir, has contributed immensely towards the compilation of the history of the Taboms.

We have gleaned from the afore-mentioned publication about varied opinions about the leadership of the Taboms. While some think the Nelsons have provided the leadership from the beginning and that Mamman Sokoto might have held that position, W.L.Lutterodt, according to Marco Aurelio's book, offers another view, explaining that Mahama Sokoto provided spiritual leadership while Mamman Nasau bore the flag of the Taboms.

The latest cultural activity to take place at Brazil House, dubbed 'Letters from Africa', had the Brazilian envoy say what surmises the history of the Taboms. 'Welcomed by the legendary hospitality of the Gas, they started, precisely in James Town, a brand new life, keeping forever the position of a link between the land that they had left and the one they had adopted,' he said.

The exhibition, he said, 'tells the history of those who have made the history of the relations between Brazil, on one side, and Ghana, Nigeria, Benin and Togo, on the other side. If fifty years ago we opened our Embassy in Accra, it was much before, in 1836, when the Tabom people landed here that the brotherhood Brazil-Ghana actually started'.

The forced labour to Brazil and the voluntary return to their roots eventually gave birth to a new breed of Gas, the Taboms, an anthropological amalgam of Yorubas, Hausas, Gas and now others from other local ethnic groupings from as far afield as Dagbon through intermarriages.