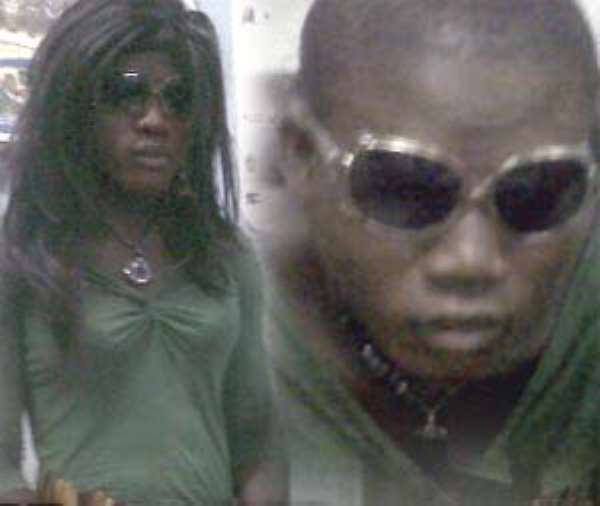 The Nima Police Command was utterly dumfounded when it discovered that a lady who has for the past two years been pestering a married man with amorous advances is a full-fledged male teenager.

Seventeen-year-old Kwamina Owusu, who posed as a pretty young lady and threatened to harm the complainant and his family, should he turn down his romantic overtures, was arrested in the company of his supposed secret admirer on their first date on Wednesday night May 4, 2011.

Kwamina claims to be a student of Christ the King Academy, Cape Coast.

According to the District Commander, Aduhene Baneyeh, Owusu had been pestering the complainant with phone calls and love proposals.

Though he had on several occasions turned his proposals down and even changed his number, the young man, who feigned as a lady, kept calling his number and was almost the first person to call him each time he reactivated his number.

After two years of unbearable and persistent calls, he decided to end the pestering.

He therefore reported her attitude to the police.
The complainant was advised to feign interest because the supposed lady threatened to kill him and his family, should he not accept his love proposal.

On Wednesday May 4, 2011, they both agreed to meet at a night club somewhere at Asylum Down.

During their meeting, the complainant was accompanied by a friend who he explained he had to drop at Nima.

At the mention of that, the supposed lady, who was adorned with ladies' apparel and ornaments, began to fret and requested to alight but the complainant objected to the request and drove on until they got to the Nima traffic intersection.

The complainant intentionally crossed the red light and was ordered by the police to park his vehicle.

During interrogation, the complainant then explained to the police his ordeal and the 'lady' was arrested but 'her' masculine voice gave him away.

The police, who doubted his feminine features, ordered a search on him.

It turned out that the 'lady' was a male. He had worn several female panties and boxer shots to boost the size of his buttocks and had worn ornaments and make-up which gave him a glowing face that could draw any man's attention.

He was quickly undressed and thrown into cells.
Owusu is still in police custody helping with investigations.

The police commander said he would be arraigned after investigations.

The discovery led a large crowd to the compound of the Nima Police Station, with onlookers debating whether or not Owusu was a gay as his intentions were not clear.