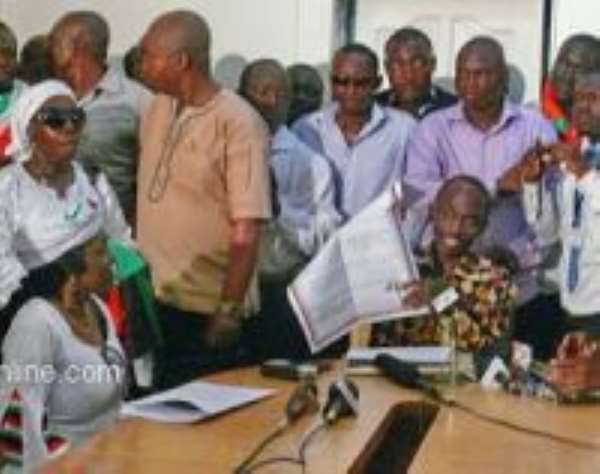 The issue of “would she; would she not” was laid boldly to rest yesterday when Nana Konadu Agyemang Rawlings, a former first lady and, until last month, the 1 st Vice Chairperson of the ruling National Democratic Congress, picked nomination forms to contest the party's presidential race in July.

It was a colourful event. She approached the Kokomlemle headquarters of the party led by motorcade, with the streets lined-up by young supporters wearing her campaign T-Shirts with a strong message to the 2,800 odd delegates: Be Bold; Our Last Chance.

After the event, she went straight home to symbolically hand over her nomination forms to her darling husband, the founder of the party, who hinted of the couple's determination to battle the “traitors” within the party to pave way to tackle their “enemies”, who are presumably in the opposition parties.

Mrs Rawlings is expected to officially launch her campaign today in the capital, with her only likely contender, incumbent President Mills, also expected to pick his nomination forms tomorrow.

The Mills camp is anxiously waiting to hear today her stated justification for launching this unprecedented challenge against an incumbent President who has expressed an intention for a second term.

Yesterday's event put to rest months of speculations and debates over whether or not the former first lady will contest the party's presidential nomination or not.

Until yesterday, some political analysts and social commentators were willing to bet against her picking up forms.

Indeed, the move by the Mills camp to engineer that chain of regional declarations from party executives was part of the psychological warfare to cow her against running.

Not even her earlier declaration of intent three weeks ago to resign her position as 1 st Vice Chairperson could convince the sceptics adequately.

But, yesterday would have. She arrived at the NDC headquarters at Kokomlemle in Accra at about 9.30am for the short ceremony amid tight security in the company of Kofi Adams, NDC Deputy General Secretary and Spokesperson for the Rawlingses, and Teye Nyaunu, Member of Parliament for Lower Manya Krobo.

Posters with the inscription, “For Victory 2012 Vote Nana Konadu”, were posted on the walls of the party's headquarters. It was her day and nobody was willing to disturb that.

Hundreds of her supporters afterwards followed her to her residence at Ridge where she formally handed over the nomination form to her husband, former President John Rawlings.

This symbolic gesture was pregnant with meaning. It removed all doubts about Mr Rawlings' intention to campaign his lifetime partner.

Former President Rawlings has not hidden his displeasure at the Mills-Mahama administration.

He, however, told a gathering of journalists, fanatics and well wishers that the battle ahead of her wife would be a herculean one.

“The task ahead will not be an easy one. We will be fighting all kinds. If we are not fighting the opposition, you have the enemy also on one hand and you have the traitor also on the other,” he said, adding, “so we have to remain very vigilant.”

The former President, however, failed to mention who the enemy or traitor was, adding, however, that "as far as truth remains a weapon", nothing would stop his wife from ensuring that the NDC was brought to the path of truth.

Many supporters of the former first lady including FONKAR [Friends of Nana Konadu Agyemang Rawlings] came from the regions to show their support for her presidential ambition.

Speaking to the New Statesman , Teye Nyaunu, MP for Lower Maya and a staunch follower of Nana Konadu, maintained there was no turning back, adding that Mrs Rawlings was capable of winning the NDC presidential slot and eventually becoming the first female President of Ghana.

According to him, the campaign team of Nana Konadu had visited all ten regions and the indication was that the former first lady would win the flagbearership to lead the NDC in 2012 general elections.

Asked if Nana Konadu would not give up her ambition in the last minute, the MP said having gone this far there was no way she could disappoint her numerous supporters across the country.

The NDC goes to congress on July 9 to elect a flagbearer for the party ahead of the 2012 General elections.