Prophet predicts earthquake will wipe out the world in Nov. 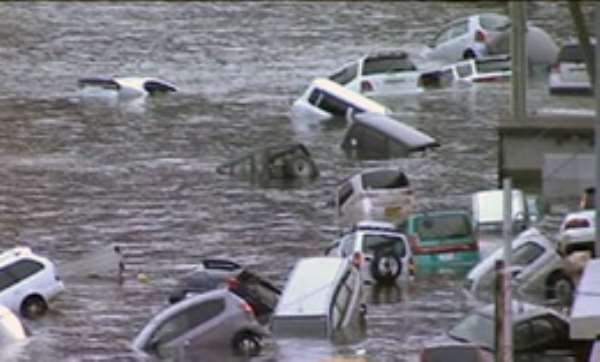 A Kumasi-based Prophet, Rev. Peter Anamo has predicted a catastrophe that will wipe out what he calls unrighteous people off the surface of the earth.

He said November 2011 will witness an earthquake on such a massive scale never seen before.

When this earthquake happens, which will be accompanied by a Tsunami, only the righteous will be saved, he told Joy FM's Super Morning Show Tuesday.

The prophet has consequently counseled all citizens of the world to mend their ways and live righteous lives for that is the only way they can be saved from the ravages of the impending catastrophe. The disaster will produce a new generation of righteous people and all must endeavour to be part of this generation by living righteous lives now! He stated.

To the Ghanaian politician, he advises that no one should waste their time, money and energy campaigning for the 2012 elections because there will be no elections after the disaster has hit. Anybody who expects to contest and win the next election may only be nursing a delusional expectation.

Quoting extensively from Matthew 24:15 and 24:36, of the Bible, the prophet said, even though the good book says “Those who shall read the abomination of the desolation written by the Prophet Daniel, let them understand,” other prophets who have received revelations about the destruction of the world have failed to understand the actual ramifications but Prophet Anamo, unlike the others understands.

A conference is being organised for men of God to pore over the Bible and “we shall declare [the truth because] my duty as a Prophet is to do better than Abraham was able to do to save Lot and his family, better than what Noah did to save his family.”

Promising to do better than biblical men of steel, Prophet Anamo said he was relying on numerology to make his prediction. “Numerology is the mystery of numbers which the Church does not know but that is unfortunate because our divine God is God of numerology that is why the Bible has a whole book on numbers.”

“I am a prophet; my job is to make sure God is able to redeem a lot of people in November.”

Grounding his argument, Prophet Anamo cited Japan which was hit by a disastrous earthquake on March 11 and also on April 11, and that that was a prelim to what will happen to the world on 11 November (the 11th month of 2011).

“The whole mystery about the numbers is that in November we are going to have four elevens appearing and it coincides with what Jesus has said and the number 11 is an irrelevant number, a confused number, that is why catastrophes happen in 11,” he stated.

“We are going to prove mathematically and scientifically and wise men's reports in the past [as well as] with the Bible…that what we are saying is true,” he emphasized.

If anybody has any doubts, the Prophet says he is willing to submit himself for prosecution should his predictions turn out to be a hoax.