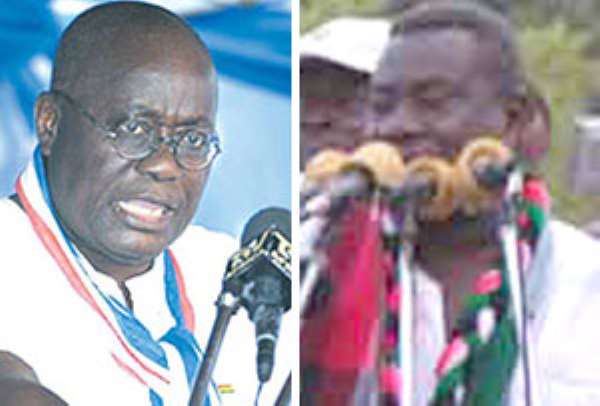 Nana Addo Dankwa Akufo-Addo, presidential candidate of the New Patriotic Party (NPP) for the 2012 elections, has descended heavily on the Majority side in Parliament that voted to allow revenue from the new oil find to be used as collateral, to enable the government raise loans.

According to Nana Akufo-Addo, he envisages a number of disturbing developments if the revenue and reserves from the oil would be haphazardly treated, and has therefore, prevailed upon President Mills not to give assent to the amendment of the bill. The collaterisation of the nation's oil revenue, he emphasised, was unfortunate and ill-informed,

'Much as the nation is rejoicing at the first pouring of the oil, there are already expressions of disquiet, as to the manner in which our oil reserves and revenues are to be treated. The decision by the majority in Parliament to amend its own bill to allow for collateralisation of our oil revenue is rather unfortunate and ill-informed.'

The NPP aspirant was making an address after holding a party in honour of former President John Agyekum Kufuor, as part of the latter's 72nd Birthday. The ceremony also marked the 10th Anniversary of the party's victory at the polls in December 2000.

Addressing the teeming supporters of the party at his residence at Nima on Wednesday evening, Nana Akufo-Addo said available evidence from the experience of other oil producing countries suggest that the policy of collateralisation of oil revenues became prominent during the oil boom of the 1970s, when oil-rich countries such as Angola, Nigeria and Venezuela, excited by the prospects of increased future oil revenues, embarked on heavy borrowing, usually on projects with inflated price tags.

The effect of the inflated cost of projects was that the economies of such countries were tied to their creditors, whilst the subsequent servicing of these debts crippled economic transformation, arguing, 'Ghana risks joining this tried and tested cursed path.'

'To avoid trouble, I would like to take this opportunity to urge the President of the Republic, not to give his assent to the bill containing the amendment of Clause 5, which removes the urgency of restraint on government expenditure, as embodied in the original bill, approved by his own cabinet. It is not in the interest of both the current and future generations,' he complained.

Touching on the achievements of Mr. Kufuor, Nana Akufo-Addo, who was full of joy, minced no words in applauding Mr. Kufuor over his eight years administration.

He described the eight year administration of the NPP, under the leadership of Mr. Kufuor, as the most progressive administration, which brought to life the concept of development in freedom.

According to him, the discovery of oil in commercial quantities in 2007, under the leadership of former President Kufuor, was one of the myriads of achievements that the NPP government recorded in its eight-year rule.

'It took a careful and determined effort on the part of the NPP government, led by President John Agyekum Kufuor, together with all the Jubilee Partners, for this feat to be achieved. Like many others who know how far our nation has come on that front, and how much you personally put in to ensure this discovery, we say to you your Excellency, 'Ayekoooo!' he said.

Nana Akufo-Addo told the ecstatic crowd that a few days ago, Ghana's Social Health Insurance Model was recognised by the United Nations Development Programme (UNDP) and the World Health Organisation (WHO), and singled out for the coveted South-South Cooperation Excellence Award, in Geneva, Switzerland.

He added that a documentary, aired on the BBC in 2008, stressed the importance of the School Feeding Programme and the Capitation Grant, and the positive impact the two were having on primary school enrolment in Ghana. Both social interventions were instituted under the NPP's rule, led by President Kufuor.

'In the area of governance, Ghana scored an excellent record of good governance under NPP's rule. The separation of powers, the independence of the Judiciary and the Legislature were respected. The media enjoyed unprecedented freedom. The rule of law prevailed, and the fundamental human rights of the people were respected,' Akufo-Addo said.  The 2012 presidential candidate recalled what he underscored as rapid economic progress which helped half the national poverty rate from approximately 50 per cent in 1991, to 28.5 per cent by 2006.

He further went on to say that those who fiercely challenged the fact that the GDP of Ghana had quadrupled (or grew tenfold per rebasing) under the Presidency of John Agyekum Kufuor, were today basking in the recent assertion that Ghana had now reached Middle Income status.

'The argument as to who is the best President in our history will in due course be settled by the historians. For me, it is enough to say how proud I was, and am, to have been a member; dare I say that even as a senior member of the most progressive administration in my adult life, an administration that brought to life the concept of development in freedom,' Nana Addo said.

Nana Akufo-Addo recounted, particularly, how proud he was to have been the instrument chosen by President Kufuor to facilitate the repeal of the Criminal Libel Law, which has led to a radical expansion of media freedom in our country.

'There are many people today, who, when they see the abuse to which that freedom is being subjected by some irresponsible elements in the media, question the wisdom of the repeal. Even though I am one of the greatest victims of that abuse, I still insist that media freedom is of itself vital for the welfare of the society,' Akufo-Addo further added.

Mr. Jake Otanka Obetsebi-Lamptey, National Chairman of the NPP, read the citation of the party to the former President. 'Your eight years in office from January 2001 to 2009 were a success story of the New Patriotic Party's philosophy, and the application of Social Economic Policies that continue to be praised at home, across Africa, and indeed the world,' part of the citation said.

Responding, Mr. Kufuor expressed gratitude for the honour done him, and told the cheering supporters that it was only the NPP that could transform the lives of Ghanaians. To this end, he urged party members to remain loyal and work together as a team for the victory ahead of the party in 2012.

The former Head of State promised to do everything within his power to see to the success of the party, and urged its members to eschew internal bickering, and consider themselves as one family.

Many party gurus, including former Vice President Alhaji Aliu Mahama, Dr. Mahamudu Bawumia, the 2008 vice-presidential running mate, and a host of others, graced the occasion.