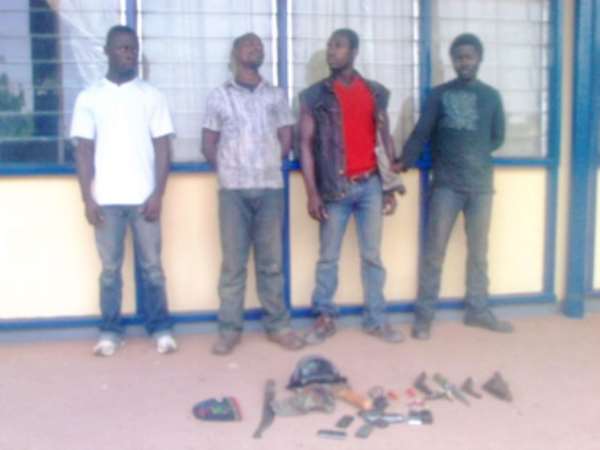 
Police in Kumasi have shot and killed a suspected armed robber and arrested four others at Ayeduase near the Kwame Nkrumah University of Science and Technology after they attempted to rob a mining company.

The deceased, identified as Nana Yaw and his gang opened fire on seeing personnel of the Buffalo Unit who had responded to a distress call from residents of a house under siege.

Nana Yaw died on the way to hospital after he was hit by a bullet but his accomplices, wielding a pump action gun and two locally manufactured pistols managed to escape.

A toy gun, knife and four used and twelve live cartridges were found on the deceased.

In another development, four suspected armed robbers who planned to attack a Chinese mining firm have been arrested.

Twenty-nine year old Moses Mumuni, Kofi Kumi who is 25 and Osei Kofi, 31 were arrested together with a taxi driver, Kwabena Antwi, following a tip-off.

They had plotted to attack Hansol Mining Company at Atabrakoso located on the main Obuasi-Dunkwa road.

Three locally manufactured pistols, a mask, three live cartridges and a machete among other weapons were found in the taxi cab with registration number AS 3573 10 which the suspects were using.

Ashanti Regional Police Commander, DCOP Patrick Timbillah has advised managers of clinics to report to the police people with gunshot wounds who may seek treatment at such facilities.

He applauded the quick response of the police to the house, saying police arrived six minutes after receiving the distress call.