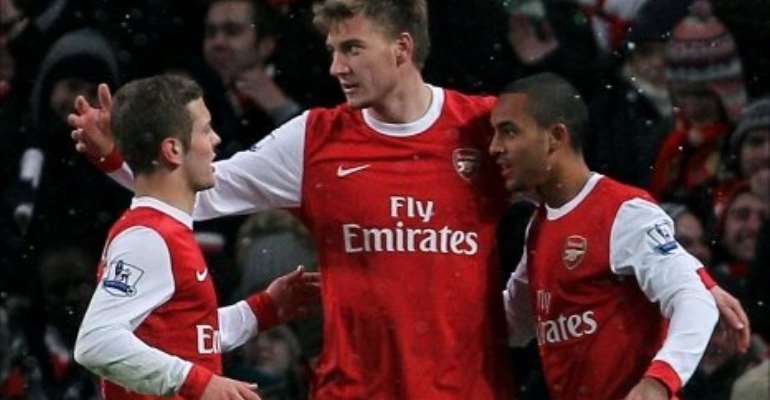 It was a comfortable victory as Arsenal reached the last four


Arsenal cruised through to the semi-finals of the Carling Cup with an easy victory over a disappointing Wigan.

Nicklas Bendtner and Carlos Vela wasted good chances before Antolin Alcaraz inadvertently guided a corner into his own net to gift the Gunners the lead.

The tie was put beyond the Latics midway through the second half when Bendtner poked home from close range.

Vela wasted further chances to extend the score, while substitute Samir Nasri had a shot cleared off the line.

Wigan, the lowest scorers in the Premier League with 11 goals, had defeated League One and Championship opposition to reach the last eight of the Carling Cup but rarely troubled Arsenal.

The Latics had scored only once in their previous five visits to the Emirates and another miserable evening in north London for Roberto Martinez's team saw forward Victor Moses stretchered off in the first half.

Arsenal boss Arsene Wenger made nine changes from the team that defeated Aston Villa 4-2 on Saturday - including the early return from injury of Emmanuel Eboue - and for long periods of the first half his team were slightly disjointed and disappointing in front of goal.

Danish forward Bendtner drifted away from his marker in the opening minutes but failed to make contact with a floating Robin van Persie free-kick.

Van Persie, who was making his first start since 28 August, produced two sensational first-half backheels that sliced open the Wigan defence and created chances for Vela but the Mexican could not provide a finish.

In the first instance, he clipped his shot beyond goalkeeper Ali Al Habsi but it drifted disappointingly wide and when through for the second time he stumbled at the crucial moment as he tried to control the ball.

The striker was having a particularly frustrating evening - as were the hardy faithful who braved freezing temperatures to watch the match - and in addition to wasting the opportunities Van Persie gifted him, he also sent a glancing header off target and had a shot deflected wide.

Arsenal, who last won the League Cup in 1993, had two decent handball appeals turned down in the opening half, the first against Maynor Figueroa and the second by James McArthur.

But if the Latics were fortunate with either of those decisions, their luck deserted them shortly before the break as skipper Alcaraz deflected Theo Walcott's corner beyond Al Habsi.

Paraguayan Alcaraz almost made up for his error when he forced a save from Wojciech Szczesny with a header shortly after Arsenal's opener but Wigan looked like a team desperately short of attacking options.

Moses, who saw one strike hit the side netting, was the only player in the Latics starting XI who had scored more than once this season but he was forced off through injury after 39 minutes and replaced by Charles N'Zogbia, the club's joint top scorer this campaign with four goals.

N'Zogbia added a new dimension to the Latics play with his direct running but it was Arsenal who remained in the ascendancy.

Vela played a key role in the decisive second goal with a low ball across the face of goal that Bendtner stabbed home.

But the Mexican's otherwise poor evening continued as he shot weakly at goal from a tight angle after Walcott had picked him out and he later failed to beat Al Habsi after a cracking through ball from Jack Wilshere.

Walcott missed by inches with a controlled strike across goal, Figueroa was fortunate to survive another handball appeal and Alcaraz cleared Nasri's effort off the line as Arsenal pushed in vain for a third goal.