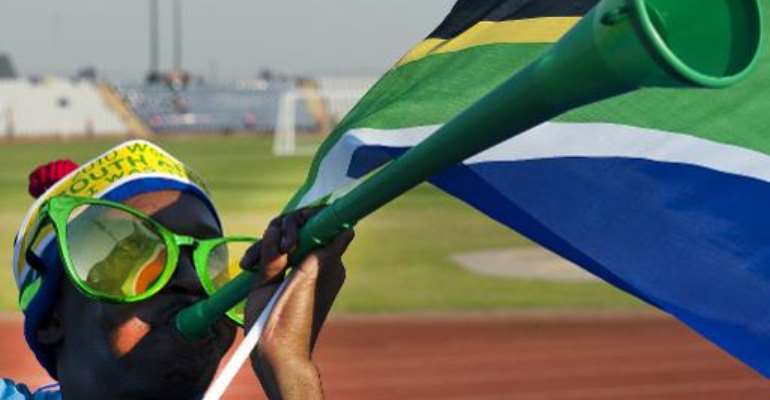 A Soweto resident is seen playing the vuvuzela at Johannesburg's Dobsonville stadium on June 3, 2010 when South Africa was hosting the World Cup. By Antonio Scorza (AFP/File)

Johannesburg (AFP) - The South African government on Thursday denied any wrongdoing over allegations that huge bribes were paid during the process to select the host country for the 2010 World Cup.

"When we concluded the FIFA World Cup here in South Africa we got a clean audit report," Minister in the Presidency Jeff Radebe told reporters in Cape Town.

"There has never been any suggestion that anything untoward happened in South Africa."

Radebe, who was on the local organising committee (LOC), did not directly address the US indictment, which alleged that $10,000 was handed over in Paris as a bribe by a "high-ranking South African bid committee official".

It also alleged the South Africa government agreed that $10 million that was due to be paid to South Africa to run the World Cup was instead transferred from FIFA's funds to pay bribes.

"Ernst and Young is a reputed auditing firm," Radebe said.

"When we concluded the FIFA World Cup here in South Africa we got a clean audit report, so what came yesterday, I think the due process will take place.

"But, as far as we are concerned as former members of the LOC, there was a clean audit report."

The South Africa Football Association on Wednesday had dismissed the allegations as "baseless".

The 2010 World Cup bidding was confined to Africa, and South Africa defeated Morocco 14-10 in a vote to decide which country would be the first from the continent to stage the tournament.

"Sepp Blatter, the president of FIFA, at the end of the 2010 World Cup, which was reputed at the time as the best ever... He gave us I think eight or nine out of 10," added Radebe.

Galamsey fight: Four Chinese nationals to be deported
33 minutes ago

Gov't must opt out of Sputnik-V vaccine procurement contract...
33 minutes ago