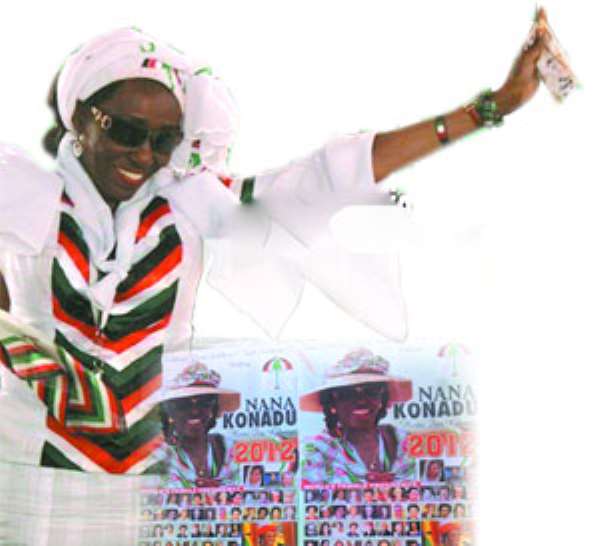 AT LONG last, the cat is out of the bag, Nana Konadu Agyeman Rawlings is to contest President Mills in the National Democratic Congress (NDC) presidential primary in 2012. Her campaign posters with her pictures boldly displayed are now out, and have been pasted at vantage points in Accra, which clearly flouts the party's rules.

The big poster of Mrs. Konadu Agyeman Rawlings, who recently attacked President Mills' deputy Information Minister, Mr. Samuel Okudzeto Ablakwa, and demanded an apology from him for endorsing comments which were wrongly attributed to her, has the banner inscription: NANA KONADU, HOPE FOR GHANA 2012.

The latest move by a group, styling itself as Foot Soldiers of the NDC, is seen as part of earlier actions by the Movement for Nana Konadu Agyeman Rawlings for the 2012 Presidency, which was unveiled at Tamale, during the June 4th celebration.

At the celebration of the June 4th event, a large banner with the inscription -'Nana Konadu for Presidency for 2012', was boldly displayed at the durbar ground, as a move to test the waters.

Scores of the latest campaign posters of the President of the 31st December Women's Movement   can be found at the Kwame Nkrumah Circle, Kokomlemle, Adabraka and other places.

The posters also have pictures of other women leaders like the late Benazir Bhuto of Pakistan and Ellen Johnson Sirleaf, President of the Republic of Liberia, among many other female leaders.

On the posters are question marks beneath the pictures, with an arrow pointing towards the former Ghanaian first lady, Nana Konadu Agyeman Rawlings.

A group calling itself Foot Soldiers of the NDC believes that it is time to vigorously campaign for Nana Konadu Agyeman Rawlings, and has indicated its readiness to put her forward, as the presidential candidate for the party in the 2012 general elections.

The spokesman for the Rawlingses, Mr. Kofi Adams would not pick The Chronicle's call, but he had earlier told JOY FM that Nana Konadu had nothing to do with the posters, however, he said the development would inure positively to the party.

He explained that the group's concerns were in the right direction and commendable, adding that the party would stick to its principles, regulations, and timetable.

Asked if Nana Konadu would support the action of the group, Kofi Adams said “…these are party people, not enemies speaking, they are party people that are speaking, so if you have party people endorsing the ideals of a party member who is at the very top, you don't come out and condemn them, what you do is to encourage them to hold up the values. At the end of the day, if they speak good of the leader of the party, it is for the good of the party…”

Meanwhile, David Allan Paintsil also reports from Cape Coast that some supporters of the ruling National Democratic Congress (NDC) in Cape Coast, and other parts of the Central Region, woke up on Sunday morning to see the posters of Nana Konadu Agyemang Rawlings pasted on electric poles, indicating her bid to lead the NDC in the 2012 general elections.

The posters, which have the picture of the former first lady embossed on it, with inscriptions like 'Konadu, the hope of 2012,' were pasted on Saturday night.

Some residents The Chronicle spoke with in the metropolis condemned the act, and described the move by Konadu Agyemang as being too early, because President John Evans Atta Mills' government was less than two years old.

John Ackon, a resident, said the former first lady has the right to contest any election in Ghana, but he has realised that Mrs. Rawlings and her husband were bent on undermining Mills' administration, because he (Mills) was not bowing to their whims and caprices.

Adjoa Amponsah, a trader at the Kotokuraba Market wondered whether only Mrs. Rawlings and her husband were ordained by God to rule Ghana, and asked the couple to allow Mills implement policies to better the lives of Ghanaians.

Although some executive members that The Chronicle contacted refused to comment on the issue, some opposition activists expressed disgust about the way and manner Rawlings and his wife have been castigating President Mills, just to pave the way for his wife to lead NDC in 2012.

Some New Patriotic Party (NPP) sympathisers also told this paper that they would encourage the former first lady to intensify her campaign, so as to create confusion in NDC, to enable the NPP regain power in 2012, to teach the NDC a lesson.

Since Konadu started her moves to become President of Ghana, she has criss-crossed some parts of the country, but has not visited Cape Coast, and information reaching the paper indicate that some youth in the ancient city have vowed to remove the posters, since it is not an election year.