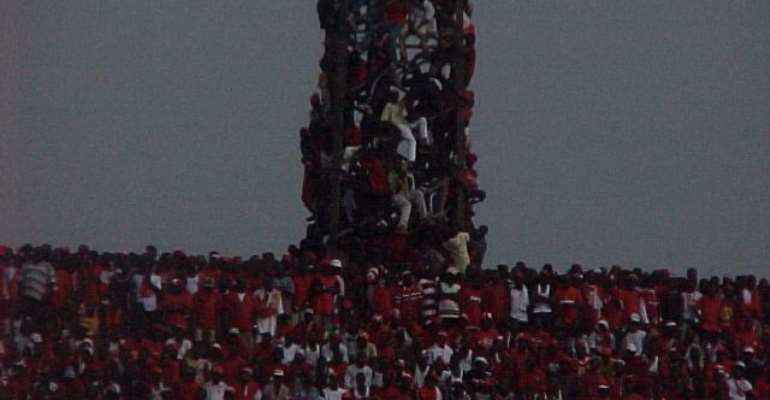 ALMOST two weeks after Kumasi Asante Kotoko’s Cup Winners Cup final match against WAC Casablanca at the Kumasi Stadium, management of the club has not officially told the board how much was made in the gate proceeds. One board member, Col. George Pattington, who is also a member of the ticket committee, upon contact said the entire gate proceeds were sent to the bank after the match, thereby leaving him with scanty idea about the total figure. He, however, disclosed that 45,000 tickets were printed and that they were anticipating to hit anything around the region of ¢1.2billion, all things being equal.In trying to correct the wrong perception that the stadium is an 80,000 seater, he explained that the Kumasi Stadium had not taken more than 45,000 fans in the past 20 years. He said further information on the issue could be sought from Mr George Amoako, the club’s director of administration and finance.But when Mr Amoako’s views were sought on the issue, he bluntly refused to give out any such information. “You’ve already speculated how much was realised, so there is no need to give you any figure.“We have our own newspaper and will publish everything in it at the appropriate time,” he stated. Meanwhile, further investigations have revealed that majority of the board members have no knowledge about details of the Spacefon and Simnet sponsorship deals. It has also come to light that at a meeting on September 2, this year, the Chief Executive of Kotoko, Mr Herbert Mensah informed the board about his decision to leave at the end of the season.According to a source the other board members and Herbert agreed that a process should be initiated to ensure a smooth transition.