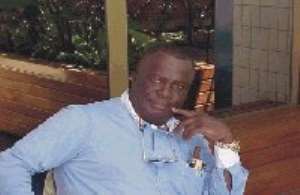 The firebrand politician and the New Patriotic Party (NPP) activist “Chuck” Kofi Wayo, has condemned what he described as unconvincing reasons given by the Minister of Finance, Mr. Yaw Osafo-Marfo, for backtracking on the transaction of the International Financial Consortium (IFC) loan. According to Wayo, the withdrawal had caused a disgrace to both the nation and the ruling party, demanding the Finance Minister and the Governor of the Bank of Ghana should resign from their positions or should be fired by the president. Mr. Wayo who disclosed this to the Chronicle in an exclusive interview last week Friday in his office said the trio of Marfo, J. H. Mensah and Paul Acquah should have known with their educational background of the IFC would be a scam. He described the government as a group of misfits, saying their minds are computerized because they are neo-colonialists and naïve. Explaining further, Mr. Wayo said, in a democratic society, the President should have resigned to allow the vice president to act. He said this would happen if the president refuses to fire those who lured him into confusion and embarrassment. He said Mr. Osafo-Marfo, Paul Acquah and J. H. Mensah had brought the nation and the party into ridicule. “Chuck” argued that “we are prepared to help JAK but he refuses to listen to us and adhere to public opinions but rather surround himself with misfits. If he had drawn closer to us, we would have told him that those who brought the deal are “con-men”. “I was prepared to help with my money but was refused”. Said Wayo. Asked why those people should be fired, Mr. Wayo said they are only enjoying the tax payers' money for free. They have limited themselves to some group in the party.” He appealed to Ghanaians to exempt the party from the mess created by JAK and his officials. “I am begging for forgiveness on behalf of the party, we are taking steps to put things together”. Mr. Wayo further asked Mr. Osafo-Marfo to give brief account on the imprest of ¢43billion he allegedly collected with regards to the IFC loan transaction