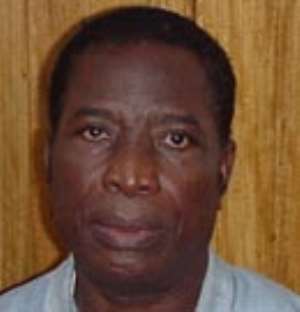 The leader of the Great Consolidated People's Party (GCPP), Mr. Dan Lartey, has strongly condemned ex-President Rawlings' visit to Tamale and statements he had made in the past as unconstitutional and issues that need to be examined critically.

According to him, the ex-president's visit to Tamale without informing the regional minister and a time when curfew was in force in the area could trigger a whole lot of security problems.

"Kuffour's administration should be in a position to contain him he should be made to face the law when he goes contrary to the constitution.

I am not expecting the ruling government to engage him in a confusing battle of words which may result in a civil clash but should be dealt with when he goes foul to the law," he added.

Mr. Lartey, who was expressing his views on the current political situation in the country in an interview with the Chronicle when it called at his office in Accra disclosed that the ex-president has a hidden agenda which he is gradually using to trap the present government.

In his view, Mr. Rawlings should be provided with security personnel at all cost even if he refuses.

"I don't think if he had security personnel, he would go about doing whatever he wants and throwing the country into chaos" he stressed.

Commenting on the Kumahu bye- elections held recently, Mr. Lartey lamented that he stood a better chance of winning but he was financially handicapped so he could not tour all the 92 polling stations in the district.

He also admitted that the incumbent government influences on the people were too great but was quick to add his party fared well because according to him, he had votes in all the 92 polling stations while the other political parties registered zero vote in some areas.

Asked whether his fourth position in the bye-elections connotes a bright future for his party, he affirmed that he was very happy that his domestication message was gaining grounds, adding, "people have confidence in me and all l have to do is to make sure that the domestication policy is turned into votes come 2004 elections".

Throwing more light on the President's encounter with the media, Mr. Lartey, commended the media for the effective role it has played over the years.

He said president Kuffour should emulate the examples set by the media by putting his words into action.

On President Kuffour appointing more ministers like his predecessors, he added that " the ministers are still too many and he has to reduce the number to about 17 ministers which l think he can control".

He called on government to use the ¢117 billion raised from taxes to boost the production level of local industry in the country. This, he said, would minimize the over reliance on foreign donors whose main aim is to make gains from developing countries by false promises.