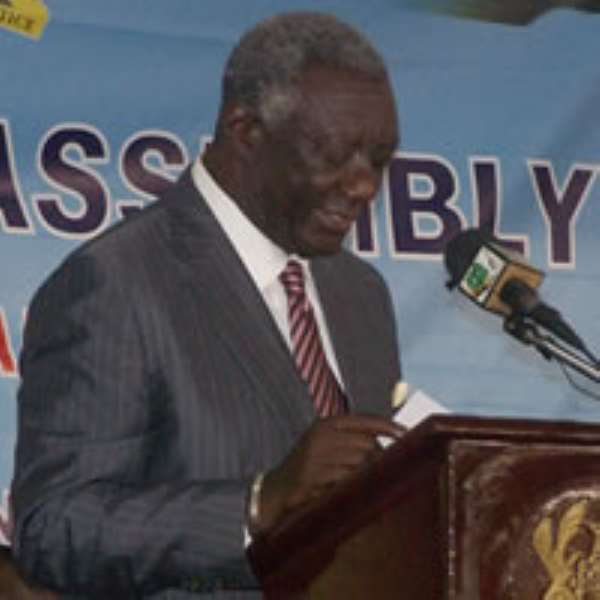 
The leadership of the Organisation of Professional Journalists of Cote d'Ivoire has met former President J. A. Kufuor in Accra and invited him to Cote d'Ivoire before its general election expected to take place this year.

The invitation, which the president of the organisation, Mr A.K.A. Pascal, said had the blessing of the Ivorian President, Laurent Gbagbo, was to allow Mr Kufuor to interact with the various political leaders in Cote d'Ivoire to ensure peaceful elections.

Mr Pascal said the organisation would appreciate it if the former President of Ghana paid the visit between February 1 and 16, this year.

Present at the meeting, which took place at the former President's residence, were the Ivorian Ambassador to Ghana, Mr Ackah Auguste Emmanuel, the First Counsellor at the Ivorian Embassy in Ghana, Mr Agouassey Danho Lelloux Yves, and the Vice-President of the Organisation of Professional Journalists of Cote d'lvoire, Mr Lebry Francis.

The presidential election in Cote d'Ivoire, scheduled originally for November 29, 2009, was postponed until February or March 2010.

Civil war broke out in the hitherto peaceful country in 2002, with rebels fighting against the alleged exclusion of people from the north of the country. An uncertain peace deal in 2003 was short-lived but another agreement in March 2007 made rebel leader Guillaume Soro the Prime Minister of a unity government.

In his remarks, Mr Pascal said the organisation decided to invite Mr Kufuor to help in the peace-making efforts before the election process because of his past experience as an African Head of State who successfully ruled his country, as well as his credentials as a lover of democracy,

He said the people of Cote d'Ivoire appreciated the efforts Mr Kufbor made towards peace in their country during his time as a President of Ghana, hence the decision by the journalists to involve him at this crucial moment as they prepared to go to the polls.

For his part, Mr Kufuor said he considered his role in finding peace in Cote d'Ivoire a "role of density", adding that he began having a special interest in the issues of Cote d'Ivoire long before he became President.

He said the late Ivorian leader, Felix Houphout-Boigny, had been his role model, adding that he admired the former leader for his efforts at building a better society for his people.

He recalled the cordial relationship which had existed between him and President Gbagbo from the period he became President of Ghana in 2001, adding that the Ivorian President had always accorded him great respect.

Mr Kufuor took the opportunity to thank the group for having confidence in him and assured them of his willingness to respond positively to their invitation to him to visit their country.