Dubai gets $10B from Abu Dhabi to cover debt 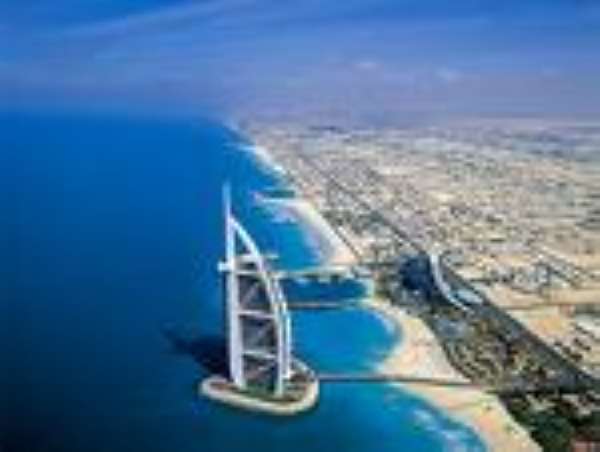 
Dubai got a $10 billion lifeline from oil-rich Abu Dhabi to save one of its prized companies from imminent default Monday, calming fears for now about the city-state's shaky finances. Dubai's main stock market spiked more than 10 percent on the news.

Dubai World -- a sprawling conglomerate with assets ranging from the oceanliner Queen Elizabeth 2 to luxury retailer Barney's New York -- had been up against a Monday deadline to repay a pile of loans from its Nakheel property division. Some $4.1 billion of the emergency funds will be used to pay off those bills. The rest will go to shore up Dubai World itself.

Dubai officials' reluctance to fully stand behind Dubai World's $60 billion in debts had raised serious concerns about the emirate's creditworthiness, and the move by Abu Dhabi appeared aimed at quashing those worries before they undercut confidence in the United Arab Emirates as a whole. The two emirates share control of the UAE, a federation of seven semiautonomous city-states.

Authorities also softened their stance Monday, vowing that the city-state was committed to "transparency, good governance and market principles." Officials outlined a legal framework that promised to increase openness and protect creditors in future dealings with the conglomerate, offering lenders further reassurance in a country where formal bankruptcy proceedings are largely untested.

"We are here today to reassure investors, financial and trade creditors, employees and our citizens that our government will act at all times in accordance with market principles and internationally accepted business practices," Sheik Ahmed bin Saeed Al Maktoum, chairman of the Dubai supreme fiscal committee, said in a statement.

The bailout is the latest by Abu Dhabi. The emirate which controls the UAE's presidency has directly and indirectly provided Dubai with $25 billion over the past year, mostly by buying Dubai bonds. In all, Dubai owes more than $80 billion -- roughly equal to its total economic output last year. The full extent of its liabilities is unknown, however, with some analysts putting the total at $100 billion or more.

The aid package is key for Dubai, the second-richest of the UAE's city-states but which has little of the oil wealth held by Abu Dhabi. Dubai's ruler is the UAE's vice president and prime minister.

Dubai created Dubai World -- which has interests in seaports, real estate, tourism and retail -- to diversify its economy and boost its international clout. Much of the growth was fueled by easy credit. As the bills came due, Dubai struggled to repay as its economy was battered by the global economic downturn.

Dubai said the rest of the funds provided by Abu Dhabi will be used to cover the conglomerate's interest expenses and general business needs through the end of April, and to pay bills owed to "existing trade creditors and contractors."

Bankers said the last-minute cash injection signaled a national approach to tackling Dubai's problems rather than leaving the struggling emirate to fend for itself.
"This is a very significant development," said Marios Maratheftis, head of regional research at Standard Chartered Bank. "It shows once again there is a one-country approach in dealing with the crisis, which is positive."

Investors cheered the news, which provided some clarity in a crisis that erupted late last month when the conglomerate unexpectedly said it was seeking new terms on repaying roughly $26 billion of its debts.

Fahd Iqbal, a Dubai-based analyst at Middle East investment bank EFG-Hermes, said the rally was to be expected but urged caution.

"This announcement constitutes a specific bailout of Nakheel, suggesting that as an entity (it) was deemed to be 'too big to fail,'" he said. "It does not, however, constitute a bailout of Dubai Inc. or Dubai World as a whole and this is important to highlight."

Nakheel is a property developer and hotel operator best known for building manmade islands in the shape of palm trees and a map of the world off Dubai's coast.

Standard & Poor's, which along with other credit rating agencies has aggressively cut its outlook on Dubai state-run companies, called Monday's move "a step towards rebuilding confidence," but warned that the government's ability to bail out other firms remains uncertain.

Dubai World said in a separate statement it welcomed the financial support, which will provide "funding and a stable basis" for a restructuring the company announced last month.

The conglomerate said it is pushing ahead with talks to convince lenders to agree to a "standstill" -- effectively a delay -- on repaying some of its debt.

"As long as a standstill is successfully negotiated, Dubai World has assurances that the government of Dubai ... will provide financial support to cover working capital and interest expenses to ensure the continuity of key projects," the company said.

To further reassure the market, the UAE's central bank, based Abu Dhabi, said it remains committed to standing behind the country's banks, including those with exposure to Dubai World and Nakheel.

Dubai was also looking to salvage the sheikdom's reputation.
Officials said the emirate plans to introduce a reorganization law that could be used in case Dubai World is "unable to achieve an acceptable restructuring of its remaining obligations."

A person close to the Dubai government said the new law provided a legal framework for addressing corporate debt, though it did not mean a bankruptcy filing by state-owned companies was certain.

"The current bankruptcy law is untested," the person said. "Dubai World needed a legal process to go through. The government was very focused on creating something that would be fair and transparent to everybody."

He insisted on anonymity as a condition for briefing reporters on a conference call.

It was not immediately clear what, if anything, Abu Dhabi would expect in exchange for Monday's funding. Analysts had said an Abu Dhabi bailout could result in it exerting greater influence on high profile neighbor going forward.

But the individual close to the Dubai government said the money came with no strings attached.

"Let me be clear: Dubai has not given anything up. There have been no conditions on the funding," he said.

The individual said it was premature to discuss what assets Dubai World might be willing to sell to pay additional bills, though he added that "all options will be discussed."