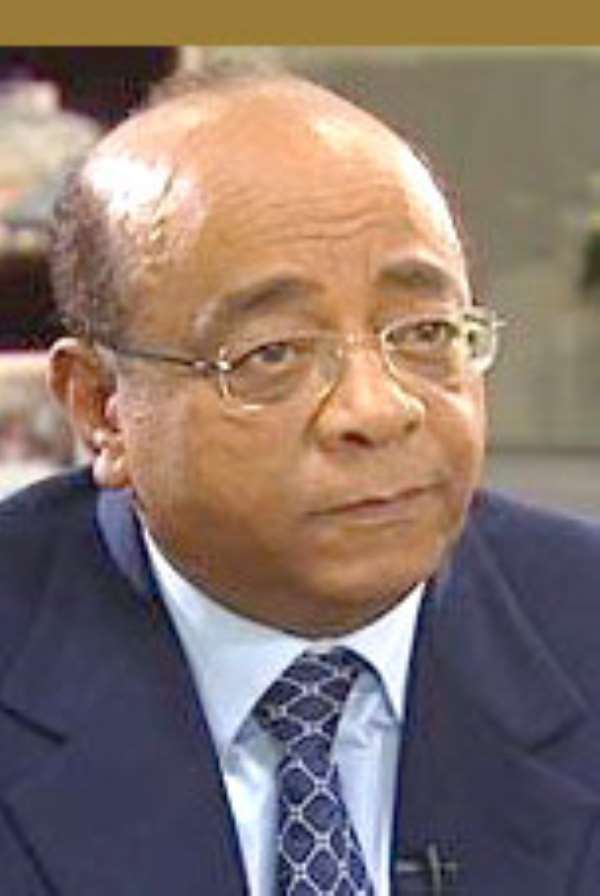 Although the Sudanese billionaire Mo Ibrahim is yet to physically meet with many ordinary Africans, I suspect he would be enamored of their views on the refusal of his prize committee to award eligible African leaders in 2009.

In the view of the passionately 'afro-conscious' academic, Africa is long past the stage where the mere fact of the continent's leaders complying with constitutional requirements qualifies them for plaudits.

She is merciless, calling on Africans to rid themselves of the irritating habit of hailing leaders on account of fulfilled electoral and constitutional obligations.

I couldn't agree more. Continuously raise the standards, we say. Had the Mo Ibrahim Prize Committee awarded any of the nominees, it would have done little or nothing to disprove that leadership and governance in Africa are so mediocre that in our collective desperation to showcase success stories, we are driven to hail the singular act of compliance with constitutional term limits as a mark of great achievement.

And so it was that by turning down Ghana's Kufuor, Nigeria's Obasanjo, Sierra Leone's Tejan Kabbah and South Africa's Mbeki, the prize committee succeeded in trouble-shooting the political arena in a way it had never achieved with its previous awards to Chissano and co.

Many Africans are themselves desperate for the kind of visionary, accountable and transparent leadership that improves the livelihoods of communities, that is a clear departure from the corruption-ridden agenda and that leaves behind the Africa that is perhaps best known for its current underdevelopment.

We are not that impressed any longer if you hand over. Infact, we expect you to. Apparently, the prize committee shares the sentiment. And yet if the above suppositions are widely held, what then accounts for the controversy that continues to dog the 'unusual' decision of the prize committee? How is it that months after, the controversy rages unabated specifically in Ghana where former President Kufuor was seen as a front runner for the 5 million dollar prize?

It is perhaps in search of closure that ace Ghanaian journalist Kwaku Sakyi-Addo prods Dr. Ibrahim himself in an engaging television interview on 29th November 2009.

It would appear then that what the prize committee failed to achieve in public awareness through its previous exertions, it has more than achieved by its singular decision not to award in 2009.

And wasn't Mo Ibrahim exciting to watch? Never mind the distance he tried so hard to create between himself and the “independent” prize committee that seats heavyweights like Kofi Annan. And never mind the caution, that eliminated candidates for 2009 remain eligible for three years.

I fail to see how a group of ineligibles will rehabilitate their reputations over the next three years unless it is expected that time will enhance their legacies. It is a slim chance and the four are better off refocusing their energies elsewhere.

The interview also allowed the billionaire to give his take on three rumors that seem to have gained currency in Ghana and elsewhere. One, that Mo Ibrahim withheld the prize because he was broke, two that the Ghana government had dispatched a delegation for purposes of discrediting President Kufuor and three that Ibrahim was being blackmailed on account of business interests in Zain mobile network operating in Ghana.

Of the three, all false, only the first is worth exploring because it affirms more than anything else Mo Ibrahim's conviction that “Africa is the place to make money”.

And this, even in a year where a global economic melt down had melted the gold of the 'savvy-iest' of investors. Not in the case of Mo's investments in Africa, it would appear.

While his investments outside the continent had declined, he had made fantastic profits in Africa beyond anything he had made in the preceding year! There were other concerns. “Why is the continent poor? Why...” he queried drawing attention to the fact that Africa has the richest resources in the world despite ironically being the least developed.

Without so many words he called for the 53 African states to unify their development agenda. This he justified by comparing the population of the entire continent to that of India.

He then drew our minds to European powers who their appreciable sizes and markets notwithstanding, still feel a compelling need to stand together to advance common financial and development interests.

This he contrasted with small African states, some too small to be viable in his view who were adamant in their walk-alone philosophies and content with flying flags and flaunting their independence.

He minced no words as he fingered governance and leadership as the main challenges facing Africa and for which the Foundation was set up.

Mo Ibrahim's focus on the people remained most thrilling. Cite Kenya and Zimbabwe as setbacks in democracy and perhaps a justification of the failure of the prize to achieve its end objectives and Mo points out how in other places, a voter turn out of about 60% was hailed a success.

90% voter turn out in Africa was a demonstration not just of the faith of the African people in democracy but an explanation of why any acts that disrespected the will of the people tended to be met with fierce resistance.

Take on Mo Ibrahim for perhaps being too passive in the affairs of Darfur and he tells you he is civil society.

Beyond that he asks you-when the Sudanese government on one hand and the 20 odd militias on the other hand all claim to be fighting on behalf of the people, just which people are they fighting for?

This thinking thus influences the Foundation's affirmatively disruptive predilection for engaging local communities and common people to find out whose ends all the killing and hunger serves and how the voices of ordinary citizens may be amplified in the search for peace.

Clearly, current African leaders interested in Mo Ibrahim's millions may have to get their acts together if this year's interesting events are anything to go by.