By The Daily Dispatch 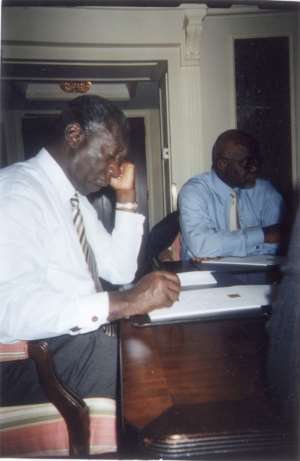 Below is an open letter written by two members of the ruling party New Patriotic Party (NPP) to president John Kufuor, requesting him to reshuffle his Cabinet, which to them currently has ministers whose performances are below expectation. The letter also touched on the issue of “Zero Tolerance for corruption.” Below is the full letter as published by the paper: Dear JAK, 20 months of governance, what next? Our New Patriotic Party (NPP) government is in its 20th month of governing this dear country of ours. We have assumed the mantle after nearly 30 years in opposition, we won the election because of the message we gave to the electorate and secondly, because of the desire of many Ghanaians to have a change in government. We believe that after 20 months, Ghanaians expect to see some actualization of the numerous promises that we made on campaign platforms. We must be fair to point out that we did not know we were going to inherit so much decay and rot. Pending ministerial reshuffle & governance: There have been reports about the reshuffle, the question now is when? We leave the timing, the nature, dismissal and changes to your discretion, as Ghana’s Chief Executive Officer (CEO). We believe there is the need to draw your attention that the number of ministers, as per even official programmes, exceeds 72. This is not to count the number of Special Assistants many ministers seem to have. We are aware of the Constitutional provision that majority of ministers must be Members of Parliament (MPs) but we believe that if you think some of your ministers or their deputies are proving inefficient, so much that their Special Assistants are more capable, then please fire them from their ministerial positions and appoint the Special Assistants. We are aware of the pressure that you went through in the appointment of ministers, trying a tough act of balancing ethnic and gender concerns. That face may be passing and all those who are not working should be shown the door. Perhaps, until the Constitutional provision requiring majority of ministers to be MPs is changed, you may consider all those who are ministers but not from Parliament to aspire to contest the 2004 parliamentary elections. Zero Tolerance: You have by actions so far, kept your promise of not tolerating or condoning corruption, nepotism and the like. Our president, we believe that the real test of your resolve is yet to be seen, it will come about when one or two of your highly placed ministers of state is caught in the web of corruption. There have been numerous allegations of corruption, involving some members of your government but there has not been any proof. We trust that if there is any, the current crop of media personnel will sniff those corrupt ones out, then your political headaches will begin. Fulfilling Electoral Promises: Whilst the government continues with its poverty reduction strategies arising out of the savings of HIPC, there is the need for Ghanaians to see visible signs of development. On paper, the Accra-Kumasi, Accra-Cape Coast and Accra-Aflao roads are ready, let it take off. Whilst these roads are being done, priority should be given to roads that lead to food growing areas, to drastically reduce the cost of food. It is clear that we cannot fulfil one of our main electoral pledges - the abolition of the cash and carry system. However, we can continue working towards its abolition so that come 2004, Ghanaians will see the death of cash and carry down the road. Dear JAK, this is the first part of the two-part open letter to you. The second part will be ready next week. Our best wishes.”