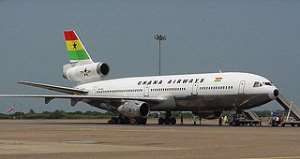 The Minister of Roads and Transport, Dr Richard Anane has banned the management of Ghana Airways led by Captain Kwakwa from talking to the media. Documents gleaned in the office of the Minister who supervises the beleaguered national carrier said the decision was arrived at after a meeting between the Minister and the management last week. The gagging came a day before the Ghana Airways Pilots Association issued an advertiser's announcement in which they accused Captain Kwakwa and his management of not seeking the welfare of workers, while condoning acts of indiscipline committed by some of the staff. However inside sources at the airline have painted a different picture of the grievances of the of the pilots who went on strike on June 19. According to these sources the recent losses sustained by the airline have been due to the attitude of the pilots who ironically claimed in their press release that they are fighting for their parochial interests which include the restoration of certain allowances including per diem, cockpit allowance among others, that the present management slashed. Part of the airline's problems have been attributed to the refusal of some of the pilots to fly or conduct training sessions except they are paid extra $40,000 in addition to their salaries. The pilots have also refused to accept management's decision to limit baggage weight of the pilots to 35kgs instead of the previous unlimited baggage. One of the companies, T&G, which has expressed interest in acquiring shares in Ghana Airways, allegedly promised to give the job of Director of Operations to one of the leaders of the Pilots, who in turn swung the support of the Pilot's Association for T&E's bid. Some members of the airline's management suspect that the pilots want them removed in order to secure Ghana Airways for T&E and subsequently be rewarded with management positions. However the decision on who gets to buy into Ghana Airways has gone far beyond the machinations of both its management and its pilots. Indeed the decision is said to have created a dilemma for President John Kufuor himself who our sources say is under intense pressure from the two bidders, both of whom are backed by his strong political allies. At a stage, the Presidency is said to have invited a bid from a third party, so as not to give a political ally ascendancy over the other. No final decision has thus been taken on who will partner Ghana Airways even as the airline's financial situation continues to deteriorate due to the debt overhang.