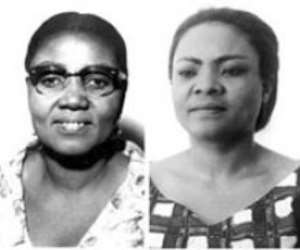 The role of women in politics and other public offices is one of the burning governance issues, largely because of the perceived and acknowledged potential and contribution of women to governance.

A recent study by Dr Beatrix Allah-Mensah of the Political Science Department of the University of Ghana, Legon, on Women in Politics and Public Life indicated that there was ample evidence to substantiate the indispensable role women played in the prelude to independence and immediately after it.

The study revealed that the role of women was evident in the support they gave to the main political party of the time, the Convention People’s Party (CPP), and it is also on record that women traders were keen supporters of the CPP government and also offered financial assistance and supportive services.

Soon after the formation of the CPP in 1949, for instance, some of them, notably Akua Asabea, stood shoulder to shoulder with their male counterparts like Kofi Baako and Sacki Scheck as they toured the country and addressed large rallies to spread the message of ‘Independence Now’ for Ghana.

Hanna Cudjoe, for instance, did not only heroically rally the people behind the independent struggle, but also went a step ahead in establishing day care centres and day nurseries.

She worked extensively in northern Ghana under the direction of Dr Nkrumah, who gave her the task of convincing women in certain parts of northern Ghana to discard some outmoded culture in the area.

During the early period of the struggle in May 1951, the CPP appointed Hanna Cudjoe, Ama Nkrumah, Letitia Quaye and Sophia Doku as propaganda secretaries with the responsibility of organising the CPP Women’s League.

Under the league, the women were divided into subsections at branch and ward levels. They organised rallies, dances and picnics as strategies to mobilise more people for early independence delayed by the colonialists for about a century.

Hanna Cudjoe was the Head of the Ghana Women’s League, and in 1960, the Women’s League and the Ghana Federation of Women, led by Evelyn Amarteifio, were merged to form the National Council of Ghana Women (NCGW) to replace the women’s section of the CPP.

The women’s movement was inaugurated by Dr Nkrumah on September 10, 1960 as the only organisation under which all Ghanaian women were to be organised to help achieve government post-independent political, social, economic and educational development of Ghana.

The party leadership, therefore, institutionalised the initiative by making constitutional provisions for women’s league at the branch and ward levels as the main organising framework for women in the party. It was, therefore, not surprising that the party gave credit to women for the internal solidarity, cohesion and success of the CPP.

Mention could also be made of the role of Dr Mrs Letitia Obeng, an educationist, and other women who were nurses, broadcasters, judges and lawyers, who became part and parcel of the independence struggle.

Though not very visible like their male counterparts in the frontline, the female politicians, nonetheless, provided a vanguard force, rallying their families, communities, trade and various interest groups to join the struggle for national independence.

Allah-Mensah’s writing on ‘Women and politics in Ghana, 1993-2003’, cited in a book titled One Decade of the Liberal State, and edited by Kwame Boafo-Arthur (2007), states that the action was largely responsible for the development of the women’s wing of the party and also for the youth organisation.

She records that women were efficient organisers who could bring thousands of people together for a rally at very short notice.

Indeed, it is noted that the NCGW and other groups were systematically and strategically co-opted into the CPP and given party membership cards as the only valid membership cards.

A paper written by Ms Joyce Rosalind Aryee, the Chief Executive Officer of the Ghana Chamber of Mines, on the Contributions of Women to Ghana’s Independence and Democratic Governance, dated March 2007 and quoted in the study by Dr Allah-Mensah, pointed out that Dr Kwame Nkrumah’s political success was based on the foundation set for women by the CPP.

It said in 1949, many benevolent and mutual associations, credit unions and market women’s voluntary groups sprang up and became staunch supporters of Dr Nkrumah and the CPP in general.

It said those associations, though were not at the forefront of the independence struggle, were involved in activities which were politically significant.

In spite of the role of women in the political struggle, there was no woman in Cabinet when Ghana attained republican status, but the contribution of women to Ghanaian politics after independence, resulted in the introduction of the Representation of the People (Women Members) Bill in 1960.

The bill was passed and it received the Governor-general’s assent on June 16, 1960. Through that act, 10 women were elected unopposed as Members of Parliament (MPs) in June 1960.

The rest were Grace Ayensu and Christiana Wilmot, Western Region, Comfort Asamoah, Ashanti Region, and Lucy Anim, Brong Ahafo. That made Ghana one of the first African countries to introduce a quota system for women.

In 1965, Dr Nkrumah appointed Madam Susan Al-Hassan as the Minister of Social Welfare and Community Development, while others were appointed as district commissioners.